Home > Featured > “All of us who knew Tony stand here in sorrow.” 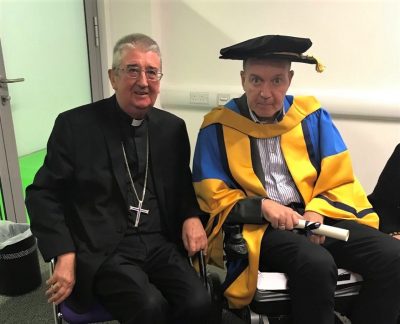 Fr Tony Coote grew as “a powerful witness” just as his human strength began to wane, Archbishop Diarmuid Martin said in a tribute to the popular priest whose removal took place on Sunday at the Church of St Laurence O’Toole in Kilmacud, Dublin.

Though confined to a wheelchair, he completed the 550km walk from Donegal to Cork accompanied by a band of walkers which included his brothers and other family members as well as other supporters and former students from UCD.

In his homily at Sunday evening’s removal, Archbishop Martin expressed the grief of all the assembled mourners: “All of us who knew Tony stand here in sorrow.”

The Archbishop expressed his sympathy to Fr Tony Coote’s mother and other family members.

Fr Tony, he said, loved them all and they loved him. They stood with him and were inspired by him, and were proud of him over these difficult months.

Archbishop Martin also thanked Fr Tony’s carers and the many who supported him and kept his spirits up. He expressed sympathy to Fr Tony’s close priest friends.

“[They] were so good to him and must be devastated by his departure,”  the Archbishop said. “He lived every day and inspired every day until the end.”

He recalled how little more than 18 months ago, Fr Tony was the energetic parish priest of two parishes and the administrator of a third one. “He brought renewal and enthusiasm to the parishes in which he worked. He was full of ideas for the future.”

His vision was of a community of believers who meet with love, mercy and support those who suffer and are troubled or fall into sin and distress or feel abandoned.

“He realised that message of Jesus can free us to be the free men and women that God wishes each of us to be, free not to be entrapped in selfishness and narcissism, but free to bring that love of Jesus to all and to lead them step by step to the fullness of freedom.”

While Fr Tony was full of ideas for the future, a different future, however, began to emerge: motor neurone disease.

“Tony was always someone with determination. Motor neurone disease did not rob him of that determination. He began a new stage in his life. Rather than making us feel sorry for him, Tony made us feel humbled in the face of what he could do.

“To remember Tony truly we must go away changing ourselves and recognising how each of us depends on the hand of God who is there challenging us in surprising ways. To focus on how the humanising power of Jesus Christ can change our own ideas of power and powerlessness, can change hearts and humanise our harsh society. That is how we should remember Tony.”

Paying tribute to the depth of Fr Tony’s priestly ministry over 28 years in Ballymun, in UCD and in Kilmacud, the Archbishop said those who mourned him had heard many people tell their own stories of what Tony meant to them in recent days.

“For Tony it was…a myriad of individual simple gestures of kindness and support, of love and respect for young and old, for the conventional and the unconventional, for the orthodox and the unorthodox. Tony planned ‘a parish for all’ because his own heart was a parish for all.

“Tony held firm to the words of our reading ‘With God on our side, who can be against us?’ He never gave up.  He made his own these other words of the reading: ‘For I am certain of this: neither death nor life… nothing that exists or nothing still to come… can ever come between us and the love of God made visible in Christ Jesus our Lord.’

“Tony translated these deep words of St Paul about trust and hope in the love of God into his own words: ‘When one day the train arrives in that Station, I will get out onto the platform with hope and no fear’. Thank you Tony. Thank you Lord for giving us Tony.”