US bishops express opposition to executive order on refugees 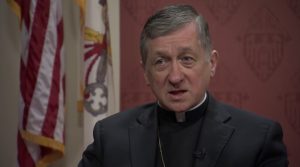 Cardinal Blase Cupich of Chicago has described President Donald Trump’s executive order on refugee admissions and migration as “a dark moment in US history”.

The executive order virtually shuts down the refugee admissions programme for 120 days, reduces the number of refugees to be admitted to the US this year from 110,000 to 50,000 individuals, and indefinitely suspends the resettlement of Syrian refugees.

Thousands of people have been protesting around the US against the recently inaugurated president’s move.

Responding, Cardinal Cupich said, “The executive order to turn away refugees and to close our nation to those, particularly Muslims, fleeing violence, oppression and persecution is contrary to both Catholic and American values.

“Have we not repeated the disastrous decisions of those in the past who turned away other people fleeing violence, leaving certain ethnicities and religions marginalised and excluded? We Catholics know that history well, for, like others, we have been on the other side of such decisions.”

He said the action imposed a “sweeping and immediate halt” on migrants and refugees from several countries, people who are suffering, fleeing for their lives.

“Their design and implementation have been rushed, chaotic, cruel and oblivious to the realities that will produce enduring security for the United States. They have left people holding valid visas and other proper documents detained in our airports, sent back to the places some were fleeing or not allowed to board planes headed here.”

He added that only at the eleventh hour did a federal judge intervene to suspend this unjust action.

The Cardinal said they had been told this was not the ‘Muslim ban’ that had been proposed during the presidential campaign, but he noted that these actions focus on Muslim-majority countries.

“They make an exception for Christians and non-Muslim minorities, but not for Muslim refugees fleeing for their lives. Ironically, this ban does not include the home country of 15 of the 19 September 11th hijackers. Yet, people from Iraq, even those who assisted our military in a destructive war, are excluded.”

In a stinging rebuke, the Archbishop of Chicago told Trump, “The world is watching as we abandon our commitments to American values. These actions give aid and comfort to those who would destroy our way of life. They lower our estimation in the eyes of the many peoples who want to know America as a defender of human rights and religious liberty, not a nation that targets religious populations and then shuts its doors on them.”

Separately, Cardinal Daniel N. DiNardo of Galveston-Houston, president of the US bishops conference (USCCB), and Archbishop José H. Gomez of Los Angeles, vice president of the USCCB, issued a joint statement regarding the executive order on the new refugee policy announced by President Trump on Friday.

They called on the faithful to join the bishops “as we unite our voices with all who speak in defence of human dignity”.

They said the Church would not waver in defence of those of all faiths who suffer at the hands of merciless persecutors.

“The refugees fleeing from ISIS and other extremists are sacrificing all they have in the name of peace and freedom. Often, they could be spared if only they surrendered to the violent vision of their tormentors. They stand firm in their faith.”

“Many are families, no different from yours or mine, seeking safety and security for their children.”

The bishops said the US should welcome them as allies in a common fight against evil. “We must screen vigilantly for infiltrators who would do us harm, but we must always be equally vigilant in our welcome of friends.”

“We believe that now more than ever, welcoming newcomers and refugees is an act of love and hope.”

He pledged that they would “work vigorously” to ensure that refugees are “humanely welcomed” in collaboration with Catholic Charities “without sacrificing our security or our core values as Americans”, and to ensure that families may be reunified with their loved ones.

On the executive order’s ban on Syrian refugees and the prioritisation of religious minorities suffering from religious persecution, Bishop Vásquez added, “The United States has long provided leadership in resettling refugees. We believe in assisting all those who are vulnerable and fleeing persecution, regardless of their religion. This includes Christians, as well as Yazidis and Shia Muslims from Syria, Rohingyas from Burma, and other religious minorities.

“However, we need to protect all our brothers and sisters of all faiths, including Muslims, who have lost family, home, and country. They are children of God and are entitled to be treated with human dignity. We believe that by helping to resettle the most vulnerable, we are living out our Christian faith as Jesus has challenged us to do.”

Bishop Vásquez also noted that more than 65 million people around the world are forcibly displaced from their homes.

“Given this extraordinary level of suffering, the US Catholic Bishops will redouble their support for, and efforts to protect, all who flee persecution and violence, as just one part of the perennial and global work of the Church in this area of concern.”