The US Ambassador to the Holy See has paid tribute to the memory of Irish priest, Monsignor Hugh O’Flaherty, who helped save the lives of 6,500 Allied POWs, Italian anti-fascists and Jews in Nazi-occupied Rome during World War II.

At a reception for members of the O’Flaherty family, as well as relatives of the family of Major Sam Derry, who ran the Rome Escape Line covertly with Msgr O’Flaherty from the Vatican, Ambassador Callista Gingrich said the gathering was “to honour the memory of an extraordinary man, whose name will live on through history”.

Members of the O’Flaherty and Derry families were also joined by members of the family of Italian partisan, Antonio Giustini, and the Chevalier family, both of whom assisted the Rome Escape Line.

David Sands’ mother Gemma Chevalier and his grandmother Henrietta Chevalier provided refuge and medical assistance to Allied escapees. They collaborated closely with Msgr O’Flaherty and risked death by their courageous actions. Their apartment in Rome was raided by the Gestapo on a number of occasions, who suspected their involvement in hiding Allied POWs and Jews.

“The O’Flaherty Memorial Society is dedicated to sharing the story of Monsignor’s O’Flaherty’s extraordinary life, and his bravery and selflessness during World War II. The story of this devout Irish priest from Killarney, and skilled Vatican diplomat, is incredible to behold,” she said.

“For a long time, during the dark days of World War II, Monsignor O’Flaherty was the most wanted man in Rome. The Nazis tried in vain to capture him. His ability to evade capture and disguise himself, earned him the nickname, the ‘Scarlet Pimpernel of the Vatican’.”

The US Ambassador to the Vatican highlighted how by the end of the war, Mgr O’Flaherty had helped save over 6,500 Americans, Jews, and Allied soldiers.

In honor of his heroism, he was awarded the US Medal of Freedom with Silver Palm, and received the Commander of the British Empire from the UK among many other decorations.

“Recently, I had the privilege of nominating Sr Orla for another special honour – the International Woman of Courage Award. I joined Sr Orla in Washington a few weeks ago as she was recognised for her incredible work on behalf of women and peace in South Sudan. It’s fitting that we share this connection.”

Jerry O’Grady of the Hugh O’Flaherty Memorial Society with the US Ambassador to the Holy See. (Photo: Sarah Mac Donald)

She also suggested that the O’Flaherty Memorial Society and the US Embassy to the Holy See share a common commitment to safeguarding freedom and human dignity.

“Our unique mission here in Rome is dedicated to this purpose. We work diligently to promote US values and policies around the world by building upon the vast reach and influence of the Vatican.

“America benefits from this vast reach and soft-power influence. Governments alone, however, cannot solve the many challenges of the 21st century. Organisations like the Monsignor Hugh O’Flaherty Memorial Society play a critical role.”

Describing herself as a life-long Catholic, she concluded by expressing the hope that the work of the Society in honour of Monsignor O’Flaherty would “continue to grow and flourish”.

Meanwhile, in her most recent update from Rumbek, Sr Orla Treacy said that the Loreto Secondary School for girls, the first in South Sudan, which was set up in 2006, has continued to grow year on year despite its limited resources.

There were 424 applicants this year, a 22 per cent increase from last year. According to Sr Orla, this is the largest group since the school started – a great milestone for the Loreto Rumbek mission. 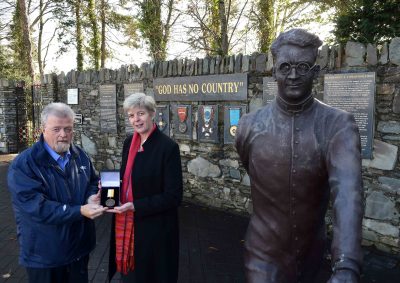 New student, Mary Ayuen from Cuiebet, which is some 45km from Loreto Rumbek, was so determined to obtain a place in the school that she arrived in Rumbek two days early so as not to miss the interview. “I want to be a doctor,” she explained.

Until recent years, girls did not progress to secondary school but were married off in their teenage years by their families, in exchange for cattle dowries.

To give equal opportunities and encourage unity and coexistence in the school, students in Loreto Rumbek are selected from different areas of South Sudan.

Fifty per cent are selected from the region of Rumbek itself; 29 per cent come from the dioceses of Wau, Malakal, Torit, Yambio, Juba and Yei; 6 per cent of students admitted are girls with disabilities, or those who have been orphaned; and 15 per cent are returnees from East Africa.

“As they integrate into life at Loreto, these new students are encouraged to exhibit tolerance and respect for each other – building unity and peace,” Sr Orla said.

Meanwhile, the Vatican is due to host a meeting between South Sudan’s President Salva Kiir and the country’s opposition leader Riek Machar on 10 April.

South Sudan gained independence from Sudan in 2011 after over two decades of civil war.

However, after just two years of independence it descended into civil war.

The civil war has resulted in the death of an estimated 300,000 people and has displaced 3.5 million people.