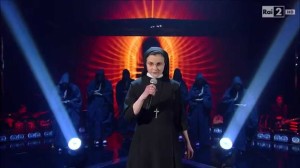 A 25-year-old Ursuline nun from Sicily is Italy’s newest pop sensation having triumphed on The Voice of Italy on Thursday evening.

Sr Cristina Scuccia, who surprised the contest’s judges last March when they discovered she was a nun, prayed the ‘Our Father’ before the conclusion of the programme.

Thanking God for her victory on Thursday, the young nun said, “My presence here is not up to me, it’s thanks to the man upstairs!”

The 25-year-old has now been offered a record contract with Universal Records but said she would leave it up to her superiors to decide what she should do.

Her rendition of Alicia Keys’ ‘No One’ in the talent show’s blind audition got more than 50 million hits on YouTube and appreciative Tweets from Alicia Keys herself and Whoopi Goldberg, who starred in the film ‘Sister Act’.

Wearing a black habit and a crucifix, Sr Cristina said that, for herself, she would like to “go back to my priorities – prayer, waking up early in the morning, school service.”

One of her notable fans is Italian cardinal, Gianfranco Ravasi, who heads up the Vatican’s Pontifical Council for Culture.

As she got through to the final stages of the contest, he posted on his twitter account, “Each of you should use whatever gift you have received to serve others (1 Peter 4:10) #suorcristina.”

A reformed rebel who used to sing in a band, her meteoric rise has brought media scrutiny and public curiosity about her.

He ex-boyfriend has been interviewed as well as the former director of the musical academy where she trained, Claudia Koll, who is now a lay sister.

According to Koll, “Cristina’s personal journey has brought her to maturity and artistic fullness thanks to a mysterious and special force. By giving herself to the Lord, she has enriched her art.” 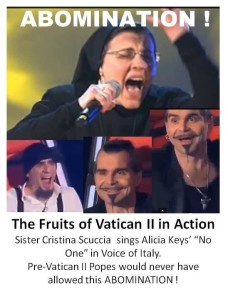 Sr Cristina has related how she was a rebellious teenager and was not always enamoured with religion but was inspired to be a nun when she auditioned for a part in a musical about the founder of the Ursuline Order, St Angela Merici.

She became a novice with the Ursuline Sisters of the Holy Family in 2009.

She then worked for two years with poor children in Brazil before formally joining the order although she has still to take her final vows.

Critics of the nun have included conservative catholics, including the blog ‘Catholic4life’ who blamed Vatican II for the nun’s efforts, describing them as “an abomination”.

Other ‘wanna be’ stars, including Emma Marrone, who represented Italy in this year’s Eurovision song contest, have also lashed out at the nun.

Marrone has criticised the media attention on the nun as “an insult to show business”.