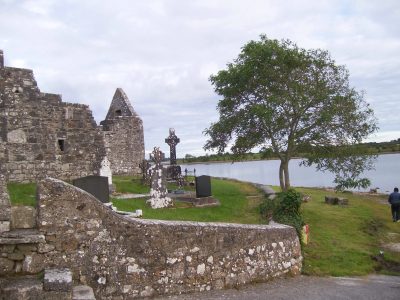 Big crowds are expected at the annual Urlaur Pattern in Mayo tomorrow.

This year the pattern day – the feast of St Dominic on 4th August – falls on a Sunday year and that is expected to boost numbers. Fine weather is forecast for tomorrow which will also encourage people to come along.

“There are sports competitions and music competitions on afterwards. It’s nothing too hectic. It’s a family day – face painting, bouncy castle. There are cups and prizes, including the Michael McDermott Cup for traditional musicians and singers,” Fr Sherlock said.

As usual, the pattern starts tomorrow with Mass at 1pm, followed by music on the lakeside featuring local traditional musicians. Then more music from the main stage will be in play from 2.30pm to 5.30pm, with Tempo as the headline act. Sports begin at 3pm and the soccer contest starts at 4pm.

There is a licensed bar and fast food will be sold. Fr Sherlock says he expects about 500 people to turn up.

Urlaur Abbey was dedicated to St Thomas in the early 1430s. However, the feast of St Dominic has always been celebrated enthusiastically here because the abbey was a Dominican foundation.

The abbey was suppressed by the British crown in the early 17th century, its lands confiscated and four of its friars killed by Cromwellians. As the Penal Laws intensified, the friars fled the abbey in 1698, with only five priests volunteering to remain as hedge priests.

By 1800, the abbey was in ruins, but local people kept and maintained the faith that had been nourished at this place. Locals kept alive the custom of celebrating the feast of St Dominic by holding a pattern at Urlaur Abbey.

“Some people just come to the Mass, others make a day of it,” said Fr Sherlock. “Afterwards, in the evening, there is a social in the community centre with music and dancing, mainly country.

“It’s very popular with the people of this parish and this area. It happens every 4th August, no matter what day it is – Tuesday, Wednesday or Thursday – and people will come back from wherever they are living now to be here for the pattern day.

“I know a chap who got his first job in HMV up in Dublin, and the first question he had to ask the boss was could he get the day off to be back in Urlaur on 4th August!”