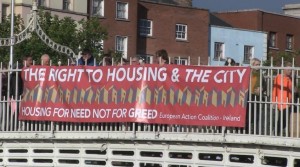 Homeless charity, Focus Ireland, has criticised the Government for a lack of urgency in tackling homelessness.

The charity spoke out following the documentary on RTE 1 ‘My homeless family’ which highlighted three families’  experiences in emergency accommodation.

It showed how they struggle with confined spaces, with poor access to cooking and laundry facilities, lack of play areas for their children and have to travel long distances to bring their children to school.

In response, some Government politicians agreed this was unacceptable but pointed to the money that they plan to spend and actions to help.

“I have a real problem with Government ministers saying this is unacceptable,” said Mike Allen, Director of Advocacy, Focus Ireland. “As a society we are accepting that families are living in this accommodation.”

On RTE Radio’s Morning Ireland show he said that positive things have been done like the improvement to the HAP (Housing Assistance Payment) which has helped a larger number of families out of homelessness.

However, everything happens far too slowly. The proposal for modular housing came out in summer 2014 and it was a full year before it came back on the agenda in mid-2015 and now in 2016 there are still no modular houses.

For the last two or three years Focus Ireland has been calling on the Government to tackle the issue of repossessions and to increase rent supplement.

“It is very hard to believe that rents could have increased any faster than they did in the last year. They (rents) have rocketed,” Mike Allen said.

Instead families on very low incomes are subsidising rent out of social welfare payment and being driven below the poverty line.

“It seems to be almost explicit Government policy that people are expected to live below that poverty line and we see the consequences,” he said.

He added that half of the proposed 2000 houses to be built by NAMA next year should be set aside for housing the homeless.

The complainants expressed concern about anti-social behaviour and child welfare and poor conditions like mice, cockroaches, bed bugs, bloodstained mattresses, and mould in the rooms.

Barnardos was among charities to express concern. June Tinsley, Head of Advocacy, Barnardos, stated that children in such accommodation are being deprived of a childhood.

“We know children thrive on routine and consistency, when that is absent in their lives then things can go a little haywire and children can suffer from low self esteem, it can impact on their friendships, they can begin to act out or become totally withdrawn into themselves,” said June Tinsley.

“The reality of having to share the same room with your sibling, your parents, and no privacy, certainly impacts on the psychological wellbeing of children regardless of whether they are two or 12 it has a huge impact on their lives long-term and short-term.”

Children and teenagers generally do not tell their friends and peers that they are living in emergency accommodation as they are ashamed. Besides the rules in some accommodation do not allow for visitors.

There are also child welfare protection implications in the hotel type setting among strangers and often near bars with noise and drunkenness.

The Children’s Rights Alliance called on Tusla, the Child and Family Agency  to audit all such properties immediately to ensure the safety of children.