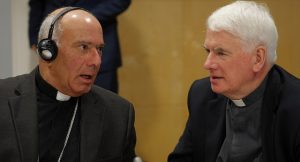 Bishop Noel Treanor of Down and Connor has told his European counterparts in the Commission of the Bishops’ Conferences of the European Community (COMECE) that “Uncertainty reigns in Ireland” over Brexit.

In his address at the COMECE plenary assembly in Brussels as part of an exchange on the outcome and consequences of the EU referendum in the UK, Bishop Treanor said it was young people in particular who “feel disenfranchised”.

He also highlighted to the other bishops the possible impact of Brexit for the island of Ireland, notably Brexit’s potential impact on the peace process and the post Good Friday political institutions, the question of a hard or soft border between Northern Ireland and the Republic of Ireland, and other potential All-Ireland impacts.

The autumn plenary assembly of the 27 bishops’ conferences of COMECE was held in Brussels from 26 to 28 October on the topic ‘The Plight of Europe’s poor & EU Strategies to eliminate poverty’.

In his opening address to the plenary assembly, COMECE President, Cardinal Reinhard Marx of Germany, said the Church wanted to make a contribution to help the European Union overcome the multiple crises it faces.

He stressed that “In this existential crisis of the EU, COMECE is more important than ever.”

On the consequences of the UK’s decision to leave the EU, Cardinal Marx underlined that it was not only a British problem. Rather, it is the European Union as a whole that has to reaffirm its goals.

The Cardinal encouraged the UK and the EU to “start moving towards each other again.”

From the perspective of the Church, with its universal vocation, one should always consider “what people have in common, beyond borders,” he said.

Bishop William Kenney of the Bishops’ Conference of England and Wales explained that since the outcome of the Brexit referendum “there is very little clarity as to what is going to happen or what consequences will ensue.”

He said the Church has a very important role in the discussions which will follow.

“As the UK negotiates the various trade treaties which it will need, the Church needs to give a voice to the marginalised and underprivileged.”

Bishop Nicholas Hudson, auxiliary Bishop of Westminster, said he was particularly concerned by the increased levels of hate crimes against foreigners in the UK after the Brexit referendum. “We as Church need to firmly condemn these crimes,” he said.

Bishop Hugh Gilbert of the Bishops’ Conference of Scotland offered a brief analysis of the motivations for the Brexit vote and the reasons for Scotland’s strong option to ‘remain’.

As the voice of the Catholic Church in the European Union, COMECE will organise a Congress in Rome in autumn 2017 on ‘Rethinking Europe’, to which bishops and lay people will be invited to discuss with policymakers the future of the political unification project.

Cardinal Marx stated, “We as members of COMECE have to embark on this difficult task, not to look for solutions in the past or on the way back, but rather, drawing upon the knowledge of the richness of the past, to find them in the future, looking forward with confidence.”

The plight of Europe’s poor was the main topic of the plenary session of the bishops of COMECE.

COMECE’s bishops met Catholic associations in Brussels which provide help to the poor – Poverello, La Viale Europe, Nativitas, L’Arche and the Emmaus Community – and heard from volunteers about the people cared for by these organisations.

One hundred and nineteen million Europeans, almost a quarter of the European population, are at risk of poverty and social exclusion.

After their deliberations, the COMECE bishops worked on a position paper which will include concrete proposals and which places the dignity of the human person at the centre of the political measures to fight poverty.

Analysing the negative perception expressed by the citizens of many member states towards the EU, the COMECE bishops recalled that it is essential for EU institutions to be truly at the service of the people of Europe, particularly the most vulnerable.

According to Archbishop Jean-Claude Hollerich of Luxembourg, “Europe must again embody a community of solidarity: the very survival of the European project depends on it.”

For Archbishop Jean-Pierre Grallet of Strasbourg, “the Church has a capital to generate solidarity, that must be shared with Europe”.

On the issue of migration and asylum to the EU, the COMECE bishops renewed their appeal to a comprehensive European asylum system (Dublin IV) supported by all member states.