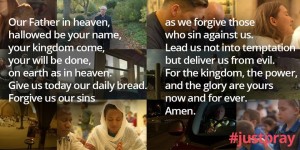 The Church of England has expressed its bewilderment at the refusal of cinemas to show a 60 second advert of The Lord’s Prayer in the UK.

The Church warned that the “plain silly” decision could have a “chilling effect” on free speech.

“I find it extraordinary that cinemas rule that it is inappropriate for an advert on prayer to be shown in the week before Christmas when we celebrate the birth of Jesus Christ,” said Archbishop of Canterbury, Justin Welby.

“Billions of people across the world pray this prayer on a daily basis. I think they would be astonished and deeply saddened by this decision, especially in the light of the terrorist attack in Paris where many people have found comfort and solace in prayer.”

The UK’s three largest cinema chains Odeon, Cineworld and Vue, who control 80% of cinema screens around the country, refused to show the advert because they said it might upset or offend audiences.

“This advert is about as ‘offensive’ as a carol service or church service on Christmas Day. As a Church, we are a Jesus movement and this is the prayer which Jesus taught his disciples,” said Archbishop Justin Welby in a statement.

“I think people need to watch the film and come to their own conclusions as to whether it is offensive or upsetting. Let the public judge for themselves rather than be censored or dictated to.”

It all began when the Church of England launched a new website to promote the renewal of prayer in a digital age.

The website JustPray.uk explains what prayer is and how to pray. It also features a ‘live prayer’ feed from across the world via Twitter, Instagram and Vine.

The advert to promote this new website was to be shown in cinemas from 18 December 2015 as part of the ad reel before Star Wars: The Force Awakens.

The 60 second advert features Christians from all walks of life praying one line of the Lord’s prayer.

They include weight lifters, a police officer, a commuter, refugees in a support centre, school children, a mourner at a graveside, a festival goer and the Archbishop of Canterbury.

Despite clearance from both the Cinema Advertising Authority and British Board of Film Classification, the advert is still being refused by cinemas.

Rev Arun Arora, Director of Communications for the Church of England commented, “The release of “Star Wars: The Force Awakens” on 18 December – a week before Christmas Day – was too good an opportunity to miss and we are bewildered by the decision of the cinemas.”

He added that prayer permeates every aspect of culture from pop songs and requiems to daily assemblies and national commemorations.

“For millions of people in the United Kingdom, prayer is a constant part of their lives whether as part thanksgiving and praise, or as a companion through their darkest hours,” he said.

“In one way the decision of the cinemas is just plain silly but the fact that they have insisted upon it makes it rather chilling in terms of limiting free speech. There is still time for the cinemas to change their mind and we would certainly welcome that.” 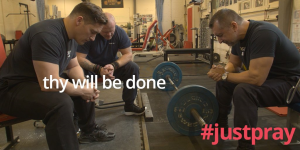 The controversial decision has sparked a media storm throughout the UK, Ireland, and worldwide.

CNN in the USA has reported it as a ‘snub’ to the Church of England.

ABC in Australia in and opinion piece by Michael Jensen rector at St Mark’s Anglican Church, Darling Point, NSW stated, “There is no proselytizing. No appeal to join a particular church. No condemnation of anyone else’s views. Just the ancient words – words that to this day are used to open the Australian parliament.”

Social Media has also been inundated. On Twitter actor Stephen Fry commented, “Banning the ad is bizarre, unfair and misguided.”

Kirat Raj Singh stated, “As a Sikh living in Britain, I do not find the @c_of_e advert offensive at all. I don’t support the ban on it.”

The banned film can be seen on You Tube, as well as films about the faith of the individuals who each pray a line of the Lord’s Prayer.

These include a weight lifter Joe of the Tough Talk Christian organisation who visits prisons to weight lift with prisoners while speaking together about faith.

Separately, the Church of Ireland Archbishop of Armagh, the Most Revd Dr Richard Clarke, this week spoke about the debate over the cinema advert, and said he was not sure if it was an appropriate place for an advertisement of this kind.

Speaking at diocesan roadshows in Mullabrack (Markethill) on Tuesday and Killyman on Wednesday as part of a series on prayer and the significance of the Lord’s Prayer, he noted that the cinema proprietors – while suggesting that they will not be drawn into religious or political controversy – are “happy to show other advertisements that are certainly ‘plugging a particular line’, socially, politically and culturally.”

Archbishop Clarke continued, “There are plenty of other advertisements, in the cinema and on TV, which wilfully demean Christmas and hence the religious sensibilities of believing Christians.”

Dr Clarke suggested that the controversy had underlined that the Lord’s Prayer “is a prayer that religious believers of almost any hue, may share in”.

“It is a Christian prayer in that Christ taught it to us, but there is no reference to the Trinity or to the divinity of our Lord. It is based around the loving fatherhood of God and our relationship with Him and with the world around us. It is genuinely a prayer that those of other religions might pray without disrespect either to Christianity or to their own faith.”