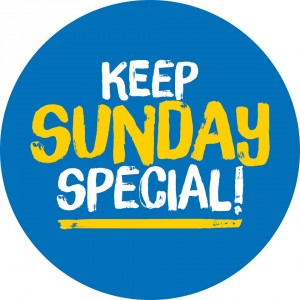 The Keep Sunday Special (KSS) group in the UK is organising a mass lobby of parliament next Monday (29 February) to call on MPs not to extend Sunday trading hours.

KSS, which includes various retail representative organisations as well as the Church of England, has been campaigning for years to keep shopping on Sunday to a minimum.

At the lobby event retailers, shopworkers, faith groups and industry experts will highlight the damage that changes to Sunday trading rules will do to the UK economy and society.

The UK government held a consultation last Summer (2015) before deciding to give local authorities the power to extend Sunday opening hours from next autumn.

Currently in England and Wales, shops over 3,000 sq ft in size can open for any six consecutive hours between 10am and 6pm, but smaller shops are allowed to open for longer. 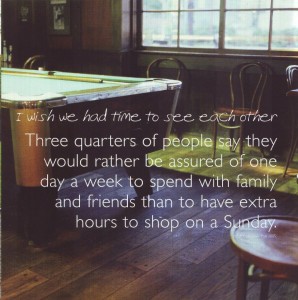 Responding on behalf of the Church of England, Bishop of St Albans, Rt Rev Dr Alan Smith said, “In its submission to the Government’s consultation on extending Sunday opening hours, the Church of England voiced concern that changing the law would have a negative effect on community and family life, whilst delivering few, if any, additional benefits for the economy.”

He added that the existing Sunday trading rules are currently backed by the majority of the public.

He does not accept that  further liberalisation of Sunday trading will bring tangible economic benefit. He suggested that the most likely outcome is that the same money will be spent over a greater period of time.

He predicted that small convenience stores will lose out to larger stores and cited estimated figures that claim up to 8,800 jobs will be lost from the convenience sector, and this will not be fully offset by new jobs in other stores. 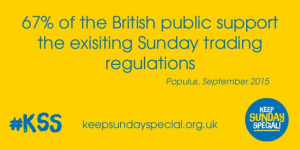 “We know that over half of shop workers in large stores already feel pressure to work on Sundays and an increase in opening hours will only lead to more people being pressured into spending Sunday apart from their children and families.”

“This can only be damaging to community and family life and erode opportunities for shared time and activity, which is central to human flourishing and the common good,” said the bishop.

Following the Government’s  publication earlier this month of proposals for devolving the rules on Sunday Trading, the Catholic Bishops’ Conference of England and Wales published the submission it sent to the government consultation last summer.

Archbishop Peter Smith of Southwark, Chair of the Catholic Bishops’ Conference Department for Christian Responsibility and Citizenship, stated in the submission, that it would be a mistake to further deregulate Sunday Trading as Sunday “retains a unique atmosphere that is positive for families and communities.”

The submission welcomed the British government’s commitment that Christmas Day and Easter Sunday will not be affected by the proposals.

These holy days are observed by a very large number of people throughout England and Wales and are also important for extended families to spend time together.

The government’s commitment that under the proposals shop workers will retain their right to opt-out of working on Sunday in line with the Employment Rights Act 1996, was welcomed but with concerns that where large business open for longer on Sunday, some employees may face pressure to work extra hours.

The submission states that economic growth and consumer choice should never be the only criteria on which prosperity is measured.

“It is disappointing that other factors such as community cohesion and family life are not addressed in the consultation document,” it stated.

Highlighting that there has been a widely recognised decline in the amount of quality time that families share and the number of joint activities that they partake in, it stated that continuing to erode the special nature of Sunday as a ‘common day off’ will make it harder to address this trend.

It concluded that the principle of a ‘common day off’ is extremely important for volunteer groups, clubs and societies.