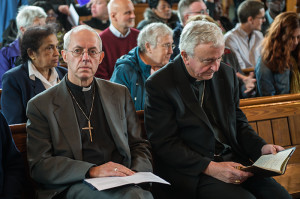 Britain’s two top church leaders have appealed for peace in Gaza and deplored the violence which has seen over 1,422 Palestinians killed, most of them civilians, since the offensive began on 8 July.

In his statement, Cardinal Vincent Nichols said his thoughts and prayers, and those of the Catholic community, are constantly with all those who have lost loved ones and whose lives are shattered in this conflict.

“The pain, anguish and sense of hopelessness of those men, women and children cry out that war is not the answer,” the Cardinal said.

He added, “As this conflict shows, violence breeds violence.”

He pleaded for an immediate truce in Gaza that “will not only put an end to this latest carnage but that will also address at last the core problems behind this conflict which has so blighted the lives of all the peoples of the Holy Land.”

Speaking on Sunday in his Angelus address, Pope Francis made an urgent plea for peace in Gaza, and also Iraq and Ukraine. “Please stop! I ask you with all my heart, it’s time to stop!” he exhorted.

Separately, the Archbishop of Canterbury called on leaders in Israel and Gaza to immediately end the violence, and urged Anglican churches both to pray and offer support to all victims of the conflict.

Archbishop Justin Welby said, “You can’t look at the pictures coming from Gaza and Israel without your heart breaking. We must cry to God and beat down the doors of heaven and pray for peace and justice and security.”

He said only a costly and open-hearted seeking of peace between Israeli and Palestinian can protect innocent people, their children and grandchildren, from ever worse violence.

“While humanitarian relief for those civilians most affected is a priority, especially women and children, we must also recognise that this conflict underlines the importance of renewing a commitment to political dialogue in the wider search for peace and security for both Israeli and Palestinian.

The Anglican leader warned that the destructive cycle of violence has caused untold suffering and threatens the security of all.

“For all sides to persist with their current strategy, be it threatening security by the indiscriminate firing of rockets at civilian areas or aerial bombing which increasingly fails to distinguish between combatants and non-combatants, is self-defeating.”

He noted that the bombing of civilian areas, and their use to shelter rocket launches, are both breaches of age old customs for the conduct of war.

“Further political impasse, acts of terror, economic blockades or sanctions and clashes over land and settlements, all increase the alienation of those affected,” Archbishop Welby warned.

“Populations condemned to hopelessness or living under fear will be violent. Such actions create more conflict, more deaths and will in the end lead to an even greater disaster than the one being faced today.”

“The road to reconciliation is hard, but ultimately the only route to security. It is the responsibility of all leaders to protect the innocent, not only in the conduct of war but in setting the circumstances for a just and sustainable peace,” he said.