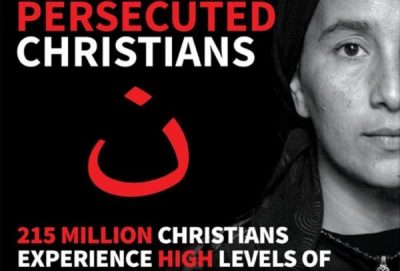 Bishops in the Catholic Church in Britain and the Church of England have welcomed the support for persecuted Christians in the final report of the independent review into the Foreign and Commonwealth Office (FCO).

In a statement, Bishop Declan Lang of Clifton and Bishop Christopher Chessun of the Church of England diocese of Southwark said, “Everyone should be able to enjoy their religion or belief, whatever that might be.”

They said they looked forward to “working with and supporting the Foreign and Commonwealth Office as it looks to strengthen its response to the very high levels of restrictions on religious freedom that we have seen in recent years”.

The report, which was carried out by Bishop Philip Mounstephen of Truro, was commissioned by the British Foreign Secretary, Jeremy Hunt.

Recommendations include imposing sanctions on perpetrators of serious human rights abuses against religious minorities – including Christians – and that all Foreign Office staff should have mandatory training on religious literacy.

It is estimated that one-third of the world’s population suffers from religious persecution in some form, with Christians constituting “by far the most widely persecuted religion”, the report states.

Elsewhere in their statement, the bishops say they are encouraged that the Final Report of the Independent Review into FCO support for persecuted Christians has grounded its analysis and recommendations in a human rights framework.

That, they believe, will benefit all who face the risk or reality of restriction, hostility, violence or death, either on an individual or communal basis, because of the beliefs they hold or as a result of their religious identities.

“We are also reassured that the Final Report reflects several recommendations from our own submission including mandatory training for diplomats, tailored reports from embassies, dedicated funding for promoting freedom of religion or belief, and better engagement with faith communities.

“Such practical steps should now be a priority for the UK government, rather than creating new definitions of persecution, which risks both oversimplifying the complex local challenges that vary between different countries and also diverting efforts from further developing the framework of international human rights protection. There is nothing to be gained and much to be lost by encouraging a competition for ‘victim status’.”

Bishop Philip Mounstephen said at the launch of the report that “Addressing this issue with the seriousness it deserves represents a step change for democratic governments.

“My hope is that in adopting my recommendations the Foreign Office will be able to bring its considerable experience and expertise to bear in helping some of the planet’s most vulnerable people.”

The report concludes that “Christian persecution, like no other, is a global phenomenon”, and as such it deserves special attention.

Focusing on it, Bishop Mounstephen argues, “is not about special pleading for Christians but making up a significant deficit”.

He said the need to address it now is urgent to ensure that Christians around the world “have a fair deal, and a fair share of the UK’s attention and concern”.

Describing it as an equality issue, Bishop Mounstephen said that if one minority is on the receiving end of 80 per cent of religiously motivated discrimination, “it is simply not just that they should receive so little attention”.

At the launch of the report, the British Foreign Secretary and contender for the Conservative leadership, Jeremy Hunt, said the world should use “Christianophobia” to describe anti-Christian discrimination.

He also admitted that the UK’s efforts to help persecuted Christians around the world has not always “matched the scale of the problem”.

Mr Hunt said he would enact all of the report’s recommendations if he becomes Prime Minister.

Open Doors, which monitors Christian persecution around the world, has estimated that on average 345 Christians are killed for faith-related issues every month.