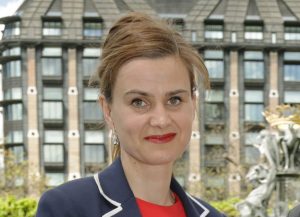 The Catholic Bishops of England and Wales have expressed their shock and sadness over the death of Jo Cox, the MP for Batley and Spen who was fatally attacked and killed in her constituency on Thursday.

In a statement, a spokesman for the Catholic Bishops’ Conference of England and Wales said, “We are profoundly saddened and shocked at the death of Jo Cox. Our society has lost a dedicated public servant.”

“Her life touched the lives of so many others and we share the deep sense of loss at her passing. Tonight, the Catholic community throughout England and Wales will be praying for Jo, her husband Brendan and their family.”

A vigil took place on Friday evening in Parliament Square outside the Houses of Parliament in memory of the 41 year old Labour MP who was shot and stabbed to death while working in her constituency.

The vigil was attended by Christians from across all parties who gathered to pray for Jo Cox’s family and to express sorrow at her passing.

The Taoiseach Enda Kenny described the killing of the young MP as an appalling crime.

A 52-year-old man arrested by police in connection with the violent attack has been named by British media as Thomas Mair. Police are investigating any possible links he might have had with far right groups.

An eyewitness, Clarke Rothwell, who runs a cafe close to the scene of the killing, told the BBC the MP had been left bleeding on the pavement after the attack.

The backbench MP was only elected last year. She had been a vocal supporter of the Remain campaign.

She sent a message on Twitter Wednesday with a picture of her husband and children in a boat taking part in the protest against UKIP’s Nigel Farrage on the Thames.

Her husband Brendan Cox is a former adviser to Gordon Brown and was head of the charity ‘Save the Children’.

He issued a statement pleading for people to unite “to fight against the hatred that killed her”.

“Today is the beginning of a new chapter in our lives. More difficult, more painful, less joyful, less full of love. I and Jo’s friends and family are going to work every moment of our lives to love and nurture our kids and to fight against the hate that killed Jo,” he said.

“Jo believed in a better world and she fought for it every day of her life with an energy, and a zest for life that would exhaust most people.”

“She would have wanted two things above all else to happen now, one that our precious children are bathed in love and two, that we all unite to fight against the hatred that killed her. Hate doesn’t have a creed, race or religion, it is poisonous. Jo would have no regrets about her life, she lived every day of it to the full.”

Jo Cox was the first member of her family to go to university. She spent ten years as an aid worker before she sought public office.

She championed unpopular causes such as refugees and Europe and lamented the lack of moral compass in British foreign policy.