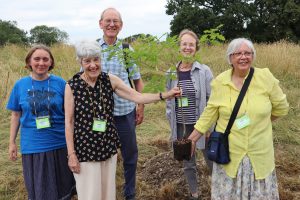 Members of the National Justice and Peace Network planting a tree in Derbyshire to mark the group’s 40th anniversary.

The director of the Jesuit Refugee Service in the UK has described the asylum process in Britain as “deeply and profoundly flawed”.

In her address to the National Justice and Peace Network conference in Derbyshire on Saturday, Sarah Teather told up to 200 delegates that “deliberate cruelty” was “a tool of government policy” in dealing with refugees.

In her address to the 40th anniversary NJPN conference on the theme: “In the Shelter of Each Other”, the former MP for Brent in north London, who served as Minister of State for Children and Families, said asylum seekers were made destitute by the asylum system.

“This is cruelty that is meted out in a deliberate way; cruelty that is a tool of government policy – it is done with the purpose to try and get people to give up their claim for shelter.”

She explained that JRS’s mission is one of “being with, not just being for” the most marginalised and that this approach had changed the whole way JRS interacts with people.

“The people we serve are those made destitute by the asylum process and those who are held in immigration detention. We have had that special ministry since we began around 20 years ago.”

“It is a mission which is founded on faith in God. Our charter says to accompany is to affirm that God is present even in the most tragic moments of human history,” she explained.

JRS in Britain has seen its staff grow from four to 12 in recent years.

Recent research  carried out by JRS into those who come to their day centre had shown that 62 per cent of them had been street homeless within the previous 12 months. Some of them were street homeless for extended periods of time but a lot them were sporadically homeless, moving around multiple friends, hoping a friend would open the door to let them in to give them shelter.

“The kind of work that we do is serving those who are destitute and who are detained,” she explained.

Ms Teather, who has worked with JRS since 2015, initially as part of the organisation’s international advocacy team, warned that the organisation has also seen the criminalisation of those seeking work and reduced access to legal aid.

“We do this work because the Jesuits asked us to work with those who are most marginalised and in the places where other people are not able to serve. We work with people who are the subjects of the hostile environment agenda.”

Referring to a “hostile web of policies” she stressed that “everyone faces the same ‘hermeneutic of suspicion’”.

Roughly 65 million people around the world are currently displaced from their homes; most of these people are displaced either within their own countries or to neighbouring countries.

“The countries that receive the most refugees are often already the poorest and those that are struggling,” Sarah Teather explained.

The UK receives around 30,000 asylum applicants a year, which she described as “a tiny number”.

“Very few people actually make it here to claim asylum, but those who do have a very difficult time. You get a small amount of money, not enough to buy a winter coat; some housing which is probably not very good quality; and you are likely to be moved around.”

She warned that problems arise when a person can’t get the government to recognise that they are a refugee.

“The people who suffer are the asylum seekers who experience the system.”

She also highlighted how access to legal aid has become more difficult and it requires lawyers to spend more time on cases.

Around 40 per cent of cases that are initially turned down get overturned on appeal.

“That gives some sense of how bad the initial decision-making is. Some people really struggle to get a fair hearing,” Ms Teather warned.

In addition, she noted, it had recently become a criminal matter if a refugee seeks work. “I find it extraordinary that the Conservative Party would criminalise those seeking to work but they have,” she criticised.

The implications, she stressed, are serious because it meant that it was much easier for refugees to find themselves in different parts of the criminal justice system.

“This is a very difficult situation: the impact of being in detention has devastating consequences on mental health that don’t go away even when you are released.”

The Jesuit Refugee Service is an international Catholic organisation. Its mission is to accompany and to serve as companions and advocate on behalf of refugees and those who have been forcibly displaced. JRS operates in about 50 countries around the world.