Home > Featured > Ugandan well to be dedicated to Diocese of Clogher

Ugandan well to be dedicated to Diocese of Clogher 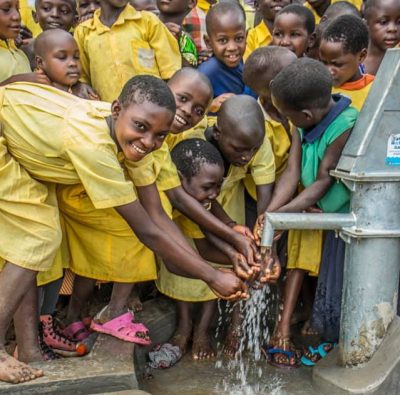 Over the coming days a group from the Diocese of Clogher will travel to Uganda for the dedication of a new well providing clean water to a rural village in the African country.

The initiative is a collaboration between parishioners in Clogher and Wells of Life, an international charity which strives to provide sustainable clean drinking water to Ugandan communities that have no running water.

Wells of Life is a non-profit Christian organisation made up of individuals, families, schools, churches and businesses. Most of its support comes from the US.

However, Lou Metzger, a parishioner from Magheracloone in south Monaghan, is an ambassador for Wells of Life in Ireland.

A lecturer in photography in Dundalk Institute of Technology (DKIT) and a former President of the Carrickmacross Lions Club, Lou Metzger is a survivor of the Hinckley California water contamination catastrophe that was documented in the film Erin Brockovich.

As someone well acquainted with the havoc contaminated water can wreak on a community, Metzger knows the importance of clean, safe drinking water and has organised the dedication of the well to the Diocese of Clogher this month.

He is also hoping that the group travelling from Clogher will bring supplies to local schools and orphanages in Uganda and that the opening of the well will change the life of the village forever and save many children’s lives.

A number of parishes in the Diocese of Clogher are already involved in fundraising initiatives to support projects in Kitui in Kenya and in Uganda, among other places.

Bishop Larry Duffy spent four years ministering in Kitui diocese in the early part of his ministry. Lending his support to the wells project he said, “The people of this diocese have a long history of generosity and solidarity with the people of Africa and several of our parishes fund various projects in Uganda already.

“Having worked in Africa myself, I know the immense value placed by people and communities on clean drinking water and its impact on their lives. I am happy that the Diocese of Clogher is being included in the work and mission of Wells of Life in Uganda and I wish Lou and all of the team every blessing in their life-giving work,” the Bishop said.

Pope Francis is a supporter of Wells of Life and Well No. 133 in Uganda has been dedicated to him.

At a Vatican conference last November, the Pope highlighted the importance of global access to clean drinking water and said there are still many parts of the world where “our brothers and sisters cannot have a dignified life because of the lack of access to clean water”.

Pope Francis described the deaths caused by bacterial contamination of water as “a huge shame for the humanity of the 21st century”.

According to the World Health Organisation, in 2015 some 2.1 billion people across the world did not have access to clean drinking water.

Wells of Life drills wells in rural Uganda and teaches the local community about sustainable hygiene and water supply.

The charity’s aim is to improve the quality of life of the people there, one well at a time.

Their mission is to tackle the worldwide crisis of the shortage of clean drinking water in the spirit of Matthew 17:20: If you have faith as small as a mustard seed, you can move mountains so that people everywhere may joyfully draw water from life-saving wells (cf Isaiah 12:3).