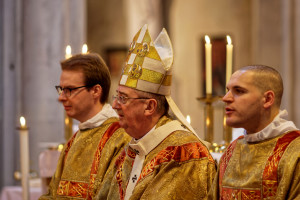 Bishop Martin Drennan of Galway presided at the ceremony at Galway Cathedral where John O’Halloran from Killannin, Oughterard and Michael King from Renmore became the newest ministers in the Diocese of Galway, Kilmacduagh and Kilfenora.

Later this year, Daniel Gallagher from Bohermore, Galway City will be ordained to the priesthood for the Galway diocese on Sunday, 17 July.

In his homily, Archbishop Martin said he was particularly happy to celebrate the ordination to the diaconate of two Dominican Friars on the Feast of the Epiphany because on the same day seventeen years ago in 1999, he had been ordained a bishop by St Pope John Paul II.

Speaking to the twelve bishops who were ordained that day, Pope John Paul reminded them that we were called to become “ministers of God’s epiphany among men”.

“Dear Patrick and dear Kevin that too will be your mission as deacons: to become ministers of God’s epiphany among men,” the Archbishop said.

Epiphany is the feast of mission, the revelation of Christ to all nations and peoples, represented by the three Magi.

He continued, “Ministry and mission belong together inseparably. The purpose of ministry in the Church is to serve the mission of witnessing to the Epiphany of God in every successive generation.”

Addressing their ordination to the diaconate, the Archbishop told the two friars, “To be called to special ministry in the Church is surely a personal privilege, but not a privilege given for our own satisfaction and gratification. If we begin to think of ministry purely in what Pope Francis calls an ‘auto-referential’ way, then we begin to betray what ministry means. Ministry and mission belong together inseparably.”

He also suggested that the Church and the faithful need to foster the gifts of the prophets of yesteryear and of our own time who could “draw out from the Word of God a critical dialogue with the language and culture of their time and which could touch the hearts and minds even of those who do not believe”.

Stating that ministry and mission belong together, the Archbishop asked what does it mean it be a missionary in Ireland today?

“Is the Church in Ireland missionary and is it successful in its missionary activity?” and he told Br Patrick Desmond OP and Br Kevin O’Reilly OP, “You must constantly ask yourselves: what are the obstacles which can appear in my ministry to me being missionary?”

He warned that the first obstacle to the Church’s mission is for it to become auto-referential, to “become a comfort zone for the like-minded”.

“It is possible to create safe spaces for those who think alike and who may come to feel that because they are like-minded they have discovered to right way.”

Dr Martin said the missionary knows that the path of mission never ends and cannot be kept within the four walls of our buildings, much less within the walls of our narrow minds.

“You must always avoid any temptation to be trapped in power: either through being a slave to the ideas of the moment or a slave to considering ministry as a way to personal prerogative. Jesus is not to be found there.”