Home > Featured > Two new monsignors in Down and Connor

Two new monsignors in Down and Connor 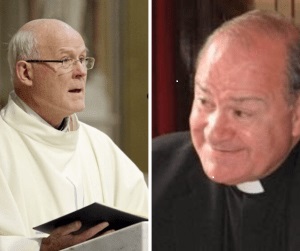 The Diocese of Down and Connor has two new monsignors. Pope Francis has honoured Fr Patrick Delargy, Parish Priest of Ballymena and Vicar General, and Fr Joseph Glover, Diocesan Curia, by appointing them as “Chaplains to His Holiness” with the title of “monsignor”.

Bishop Noel Treanor, Bishop of Down and Connor, congratulated the two new monsignors on what he called a “joyful occasion”.

Monsignor Delargy is a native of Cushendun, and he entered St Malachy’s Seminary, Belfast in 1965. As part of his studies for the priesthood, he studied philosophy at Queen’s University Belfast from 1965 to 1969 and did graduate and postgraduate theological studies at the Pontifical Irish College, Rome.

In August 1989 he was appointed President of the secondary school he had attended himself, St MacNissi’s College, Garron Tower. He was appointed as Administrator of the Parish of St Colmcille’s, Belfast in August 2002. Since September 2009, Monsignor Delargy has served as Parish Priest of Ballymena where he met the late Rev Ian Paisley. The parish’s most famous parishioner is Baroness Nuala O’Loan.

In 2015 his book Hold your Head up High and Other Stories (Shanway Press) was published with almost 20 parables based on his own life experiences. Some of the topics in it include IVF, the Troubles, celibacy and women priests. He became Vicar General in 2017.

Monsignor Joseph Glover is a native of Holy Family Parish, Belfast, and his secondary school education was at St Malachy’s College, Belfast. He did his studies for the priesthood at St Kieran’s College, Kilkenny, and was ordained to the priesthood in 1982.

Monsignor Glover became Curate of the parish of Downpatrick (1982–1985) and then spent another four years as curate in Glenravel. In December 1989 he was appointed Director of the Diocesan Child Care Services and, since 1991, he has served as Diocesan Secretary and Financial Administrator working within the Curial Offices, Lisbreen.

The title “monsignor” is an honorary one granted by the Pope, on the recommendation of a priest’s bishop, for the priest’s service to the local church or their special function in church governance.

The title historically designated a priest who served in the papal curia, so all monsignors are considered part of that, whether they serve in the Vatican or elsewhere.

In scaling back honorific positions within the Catholic Church in 2014 Pope Francis kept the category of “Chaplain to his Holiness”. Reforms by Pope Francis mean that the honorary title of monsignor is only granted to a diocesan priest who is over 65 years of age.