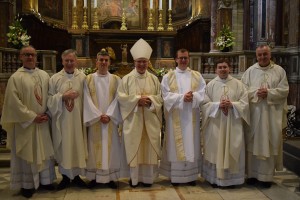 On Tuesday, two seminarians studying at the Irish College in Rome were ordained deacons by the Bishop of Derry in the Roman basilica which was dedicated to St Mark in the year 336.

Rev Malachy Gallagher (32) from Coleraine, Co Derry and Rev Bill O’Shaughnessy (28) from Castledermot, Co Kildare were joined for the celebration by their fellow seminarians from the Pontifical Irish College as well as a large group of family and friends who travelled from Ireland.

In his homily, Bishop Donal McKeown encouraged the two young men “not to be afraid to accompany their contemporaries on their journeys”.

“Have a divine patience and love for those to whom you will be sent to proclaim the Resurrection….. Learn how to speak of the hope that is in Jesus Christ,” the Bishop of Derry urged them.

“The uncomfortable word of God that calls us to repent has to be heard by us before we can ask others to repent and be baptised. The temptation for Church in modern Ireland is to retreat behind ramparts of self-righteousness and fear.”

“That is where many would like us to be, roaring from behind the walls but talking only to ourselves.”

Dr McKeown underlined that the Irish Church is being renewed, “not so much to fit in with contemporary culture as to stand out from it.”

Following the ceremony, the Rector of the Pontifical Irish College, Mgr Ciarán O’Carroll rejoiced at the ordinations.

The Pontifical Irish College in Rome was founded in 1628 and has been educating candidates for the priesthood for ministry in the twenty six Irish dioceses for almost four hundred years.

Currently, there are twelve seminarians from Irish dioceses in formation at the College.