Two Irish Jesuits participating in election of next global leader 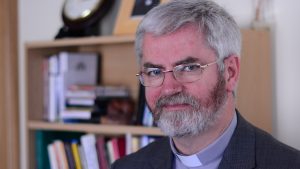 Jesuits from around the world begin their consultations at the 36th General Congregation which will select a successor to the current Superior General of the Society of Jesus, Fr Adolfo Nicolás.

Irish provincial Tom Layden SJ and the director of the Jesuit Centre for Faith and Justice, John Guiney SJ, are the delegates attending from Ireland.

The process gets underway on Sunday with an opening Mass at 5pm at the Church of the Gesù in Rome.

The man chosen will be the 30th general superior since the society’s foundation in September 1540 by St Ignatius of Loyola. The theme of the deliberations is ‘rowing into the deep’.

A general congregation is summoned on the death or resignation of the head of the Society of Jesus to choose his successor, or when the General decides action is needed on serious matters that he cannot or does not want to decide on alone.

In December 2014, Fr Adolfo Nicolás announced his intention to resign.

The logo and theme for GC36 was inspired by Pope Francis’ message to the Jesuits on the 200th anniversary of the restoration of the Society of Jesus.

On 27 September 2014 in the Church of the Gesù in Rome, the Pope urged Jesuits to discern in difficult times; to be receptive of and obedient to the will of God; and to row with him in the service of the church according to the call of Jesus to his disciples to “put out into the deep.”

On the GC36 logo, the IHS represents the Society’s boat in the church, and the waves represent the sea where Jesuits are invited to enter and row out into, toward frontiers.

The first general congregation took place in 1558. It had been delayed for two years after St Ignatius’ death because a war between King Philip II of Spain and Pope Paul IV. Fr Diego Laynez, SJ, was elected Superior General.

Some congregations last for months — and one, GC 31 in 1965-66, met for several months, broke for more than a year, and then resumed for two more months.

When it is in session, a general congregation is the supreme governing body of the Society of Jesus, outranking even the Jesuit Superior General.

For an in-depth analysis of how a general congregation works you can watch this video interview with Pat Coyle and Jesuit theologian Jim Corkery, who lectures in the Gregorian University in Rome, and was a participant in GC35. http://www.jesuit.ie/news/gc36-puts-deep/