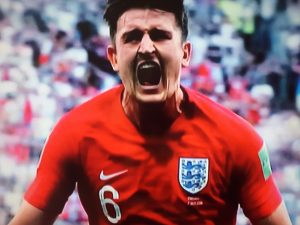 The world of soccer thrives on trivia, but here are two nuggets of information you might have missed: England’s two goal scorers in yesterday’s World Cup quarter-final against Sweden, Harry Maguire and Dele Alli, are both Catholics.

As you might guess from his surname, Maguire is of Irish ancestry. He and his two brothers, Joe and Laurence, who also play football professionally, all attended St Mary’s Catholic High School in Chesterfield, where their sister Daisy was still a student until the end of this academic year.

Maguire left the college ten years ago, but he still regularly returns to his alma mater to encourage the students there to strive to achieve their best. Deputy Principal Sue Cain told The Derbyshire Times recently: “He was a remarkable student, who always came in and worked very hard. He was never in any trouble and he had such a good attitude.

“He was very capable academically. He got A+ and A grades in his GCSEs. I think he would have gone on to study business or maths and probably would have been an accountant.”

Instead the England number six followed his dreams to become a professional footballer. He signed for Sheffield United in 2010, before moving to Hull City in 2014. Since 2017, he has been with Leicester City, making 44 appearances for the club last season.

The second goal scorer for England yesterday was Bamidele Jermaine Alli, better known as Dele Alli, who is noted for his habit of blessing himself before stepping out on the pitch. Born in Milton Keynes to Nigerian parents, the England number 20 didn’t have the easiest of childhoods. Family difficulties saw Alli’s father take him to Nigeria where he lived for two years before returning to England to live with his mother for a while.

After securing a place as a youth player with Milton Keynes Dons at the age of 13, he moved in with the family of another young player at the club. Today he refers to Alan and Sally Hickford as his “adoptive parents”, even though he was never legally adopted by them.

Rated as one of the best midfielders of his generation, Alli has won the PFA Young Player of the Year award twice in a row. In 2015, he signed a five and a half year contract with Tottenham Hotspur for an initial fee of £5 million.

Following Russia’s defeat in last night’s other quarter-final, England will play a semi-final contest on Wednesday against Croatia, a team that is predominantly Catholic. Does religion matter in international soccer? Probably not, but it does add to the rich tapestry of the beautiful game!