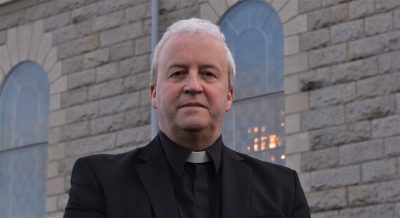 Both the Bishop of Meath and the Auxiliary Bishop of Armagh have pleaded with those involved in the gangland feud in Drogheda to end the violence which has resulted in three deaths in six months.

Speaking to RTE News on Sunday, Bishop Tom Deenihan of Meath said the feud “runs the risk of degenerating into a cycle of violence that will destroy everything in its path”.

The Bishop attended a prayer service at Holy Family Church in Ballsgrove, which is the local parish of murdered Drogheda teenager Keane Mulready Woods. He was joined at the service by the murdered teen’s sister and brother as the congregation lit candles and prayed for peace in their community.

Bishop Deenihan later visited the family home of the 17-year-old who was abducted last weekend and murdered; his dismembered remains were left at Coolock and Ballybough in Dublin.

He told RTE News that enough people had suffered and that violence “leads to nowhere” and that no family should have to go through what Keane Mulready Woods’ family had gone through.

Separately, Bishop Michael Router of Armagh told CatholicIreland.net that though he is willing to mediate between the feuding criminal gangs in order to try to bring an end to the violence in Drogheda, he didn’t want to give the criminals “any feeling of self-importance” or that they are in control.

“I can see where people would have issues about someone like myself mediating when these are hardened criminals – you are giving them a sense of credence by sitting down and talking to them; but I think something has to be done to stop the violence.”

Stressing that his motivation was “try and bring peace back” to the streets of Drogheda, he said “we have got to restore people’s sense of confidence that when they go into the town that they are not going to be caught up in something. We just can’t allow that to happen.”

“I am not foolish enough to think that I am going to achieve an end to all the social problems,” he stressed. But he added that in Northern Ireland, “someone had to shout halt at some stage to stop the bombings and the shootings and people had to swallow a lot of things in order to achieve that. I think something similar has to be done in Drogheda.”

Commending the Gardaí for their efforts to contain the feud, Bishop Router said politicians had to see the long-term implications of policies on housing, healthcare and education.

Over decades housing policy had created estates with very few resources. “There needs to be a change in how we approach housing,” he stressed and criticised the handing over of social housing to the private sector and the location of working-class estates “at the edge of towns out of the way” where “problems fester”.

Dr Router also called for better funding and resourcing of mainstream education and community education in deprived areas so as to help people improve their lives and find a pathway out of their economic difficulties.

“You have to join all the dots.” The situation is Drogheda, he said, “is a consequence of policy failures over many years and it is going to take a major effort to turn that around and provide the healing that is necessary.”

He paid tribute to community groups and volunteers who work on the ground to address drug addiction, such as the network FASN with which he is involved with in Dundalk. “They are a small group of volunteers and are constantly looking – begging for the resources they need to do the good work that they are doing.”

The Bishop, who has care of parishes north of the River Boyne in Drogheda, also told CatholicIreland.net that the Church needs to be seen as a partner and that there needs to be a recognition that the values it espouses lead to the building of healthier communities. He appealed to people to work with the Church and not against it or to try and push it to the margins of society and say its voice doesn’t count.

He also lamented that the drugs culture is increasingly operated by many younger groups who have “no moral centre or ethical base and will do anything to get ahead in the drugs game”. The whole situation was becoming unmanageable, he warned.

In his statement released last week, Bishop Router appealed, “From the bottom of my heart” to individuals and communities “to stand together and cooperate with Gardaí in every way possible to help permanently bring to an end this cycle of bloody violence in our community”.