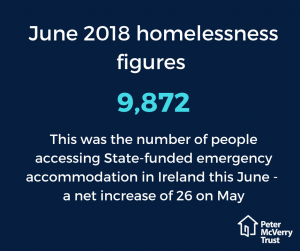 There were 9,872 people in emergency accommodation during the week of 18 to 24 June 2018, an increase of 26 people compared with May, according to the latest statistics from the Department of Housing, Planning and Local Government.

The figures are broken down into 6,048 adults and 3,824 children homeless in June. That is an increase of 26 adults and a decrease of 2 children in emergency accommodation compared with May.

He pointed out that the increase from May to June was 26 in 2018, while during the corresponding period in 2017, there was an increase of 242 adults and dependants in emergency accommodation. “So the change is much better when compared to last year. Encouragingly, other figures released today show that the number of families and individuals waiting for a social housing home across the country has fallen by 16 per cent since the same time last year and that the provision of social housing is on target for 2018.”

However, Focus Ireland cautioned against seeing such increasing homelessness as “normal” and while there is welcome progress in some areas, the government is still failing to do enough to ease the crisis. “We must never allow the constantly rising number of people becoming homeless each month to become the norm and there is a real risk that this is starting to happen,” said Pat Dennigan, CEO, Focus Ireland.

Focus Ireland highlighted the longer-term figures, which show that only 3 years ago in June 2015 there were 1,318 children homeless, which was seen as “shocking” at that time. That total has now trebled.

“This is the highest June figure ever recorded,” said Pat Dennigan. He added that even though Ireland is in the middle of the “worst crisis in living memory”, there are positives such as how Focus Ireland – in partnership with the State – helped over 1,060 households to secure a home and move on last year.

“This shows homelessness can be solved, but with the numbers becoming homeless increasing every month we are having to run to even stand still in terms of the crisis. This is wrong, unsustainable and much more needs to be done,” he said.

Focus Ireland called on the government to take action by cutting the number of people becoming homeless every month while helping more families and individuals to secure a home and move on from homelessness.

Focus Ireland also pointed out that changing the way people are counted while on social housing lists makes it difficult to chart progress.

“While the fall in the number of people on the social housing waiting list is good news, one of the main drivers of this fall has been the fact that people who take up HAP (Housing Assistance Payment) are no longer counted on the waiting list – unlike in the case of Rent Supplement which it replaces,” said Pat Dennigan. “If the department published the numbers on the HAP Transfer list, it would help get a better view of the progress that is being made and would be in line with government commitments to make HAP more transparent and attractive.”

Children’s charity Barnardos also highlighted that child and family homelessness is “a national crisis” as the numbers of children living in emergency accommodation have risen sharply in the mid-west (Clare and Limerick) and the south-east (Carlow, Kilkenny, Tipperary, Waterford, Wexford).

June Tinsley, Head of Advocacy, Barnardos, agreed that the total number of children living in emergency accommodation in Ireland dropped slightly in June but added: “We have seen large increases in two particular regions. The mid-west has seen a 23 per cent increase in child homelessness, while numbers increased in the south-east by 24 per cent. More is clearly needed to support families in these regions – and tailored supports are necessary.”

She added that many families who end up in emergency accommodation are located far from their own home and community. Where public transportation is limited, families experience greater isolation at a time when they need the most support.

Barnardos called on the government to quickly provide solutions to limit what it called “the long-term damage” being done to thousands of homeless children across the country.