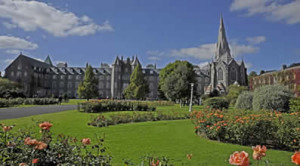 Twenty new seminarians were welcomed to the national seminary in Maynooth on Monday to begin their studies for the priesthood in Ireland.

The number is up from twelve this time last year and according to Fr Willie Purcell, National Vocations Co-ordinator, the “obvious increase in numbers is a great sign of hope for the Church in Ireland.”

At the conclusion of the Introductory Programme at the end of September, three of the new seminarians from Northern dioceses will continue their studies at St Malachy’s Seminary in Belfast.

Welcoming the new candidates, their families and friends to Maynooth, the President of Maynooth, Mgr Hugh Connolly, recalled the recent words of Pope Francis in Rio de Janeiro for World Youth Day in July.

Mgr Connolly continued, “As the Church continues to celebrate this Year of Faith may the year ahead be an opportunity for all of us to appreciate the gift of our faith, deepen our relationship with God and strengthen our commitment to sharing our faith with others.”

Speaking to CatholicIreland.net, Fr Willie Purcell said the jump in numbers “shows that despite all that is happening in society and all that has been happening in the Church, men are still thinking about priesthood and these men have decided to say yes and are following through.”

Asked about forthcoming campaigns to promote vocations, Fr Purcell said the “greatest publicity event you can have is the fact that twenty men have gone to Maynooth this week to begin studying for the priesthood.”

“That witness in itself is the inspiration that will certainly have a great effect on this country in relation to men who are thinking of priesthood.”

He said that over the coming year the vocations directors would be “active in dioceses and nationally at different events” in promoting vocations.

A breakdown, by diocese, of the twenty first year seminarians for 2013 is as follows:

Overall the northern dioceses contribute the majority of the vocations. Asked about this, Fr Purcell told CatholicIreland.net “It is a very difficult to actually pin point why some dioceses have large numbers and other dioceses sometimes just have one or sometimes none.”

“I think the greatest source of encouragement to men who are thinking of the priesthood is when they see other men – particularly other men of their own age – who have actually made the decision and gone ahead and entered the seminary.”

In relation to Derry and Down and Connor, Fr Pucell said, “There has been a consistent number of students from those dioceses over the years and I think when other men look at this, there is a sense that they are not joining the seminary on their own but they have others their own age group and cultural stage who are entering as well.”

At the end of September the total number of resident seminarians in St Patrick’s College, Maynooth, will be approximately seventy. [A further twenty non-resident students pursue their academic studies there].

St Patrick’s College Maynooth has been forming men for the priesthood since 1795. The current Trustees of the College are the four Archbishops of Ireland together with 13 other senior bishops.