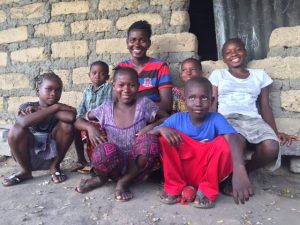 Trócaire, RTE’s One World and Newstalk radio are all highlighting the devastating effects of the Ebola Virus Disease (EVD) outbreak two years on.

KMF Productions is currently filming on location in Sierra Leone with Peadar King for Series 10 of RTÉs ‘What in the World’ TV programme.

Supported by the missionary group Misean Cara, the KFM documentary will include interviews with families and medical workers directly affected by Ebola.

The programme will tell the story of Fatmata Kargbo who lost her husband, two children, mother, sister, brother, grandmother-in-law and other relatives to Ebola.

Now at the age of twenty-five she cares for six orphaned children – those of her sister and other family members.

“I love them and care for them, as if they came from my own womb,” she told KMF. 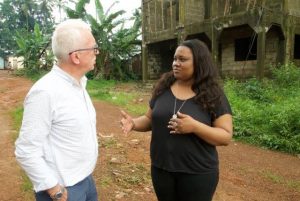 Academic and activist Fatou Wurie will talk in the documentary about the fear that gripped the country following the outbreak of Ebola in December 2014.

She states that the disease spread primarily among carers so the poor and rural communities were disproportionately affected.

Acknowledging the work of NGOs, she is critical of the initial international response, particularly of the World Health Organistaion,

The country was declared Ebola free in January of this year. Fatou believes that Sierra Leone has learned important lessons from its trauma.

This new level of awareness of the disease acts as a protective barrier should it ever re-appear, she states.

There, 42 people were infected with Ebola, and 39 of those passed away. Due to the high number of cases, this community was put under quarantine and confined to home for 21 days in July of 2015.

“You could not even jump over this road,” Ya-Koloneh Kamara one villager stated pointing from her home to a well only a few metres away.

In an article by Australian Aid published by Trócaire she said they had to depended on the handouts of bottled water from NGOs.

These restrictions impacted Ya-Koloneh’s livelihood as she could not go to her land to farm.

This was the case with many farmers who lost a lot of agricultural produce.

In the short term Trócaire’s partner MEWODA provided seeds and tools, for farmers to carry out backyard gardening within the confines of quarantine.

Once the quarantine was lifted, and even later when Sierra Leone was declared Ebola free, the community of Yelisanda still had obstacles to overcome.

They had to carry on with life in the wake of the deaths of their family members and friends. Tensions were still high as people blamed individuals in the community who they felt ‘brought’ Ebola to village.

As a result of the Ebola virus, Ya-Koloneh now provides for twelve people in her family. Her sister’s husband passed away during this period, which meant that her sister was alone and under pressure to raise five children so Ya-Koloneh stepped in.

“It’s difficult but I know I have to do this,” Ya-Koloneh said. “There are no other relatives”.

The financial strain meant that her son, Daniel Kamara (then 17 years old) was forced to withdraw from his education.

MEWODA, with the support of a Trócaire project funded by the Australian High Commission’s Direct Aid Program (DAP), provided women such as Ya-Koloneh with seeds for rice, groundnut and ginger, as well as farm tools like  hoes, cutlasses, and harvesting knives.

One method of increasing resilience is through diversifying crops. Ya-Koloneh, for example, now grows a variety of produce including corn, cassava, okra, eggplant, groundnut and other vegetables. She has been able to sell some and send Daniel, her son, back to school.

The Newstalk programme is expected to be broadcast in the Autumn. The  What in the World TV series will return to RTE  in December.