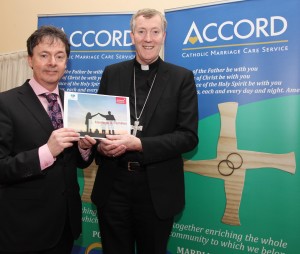 Bishop Denis Nulty, President of Accord, at the launch of Amárach’s research findings on Irish attitudes to marriage and the family with Gerard O’Neill from Amarach Research in Whitefriar St Church in Dublin. Pic John Mc Elroy.

“Baffling” and “perplexing” was Bishop Denis Nulty’s response to the unexpected news that the Government’s child and family agency, Tusla, is to withdraw its funding for ACCORD.

In a statement on Tuesday evening, Bishop Nulty who is president of the Catholic marriage care agency said, ACCORD only received the news of the funding withdrawal on 7 May which will apply retrospectively from January 2015.

Describing it as a “retrograde step for society” the Bishop called for the decision to be “reversed immediately”.

The €378,000 lost by ACCORD for 2015 relates to its marriage preparation courses. For now, it seems that funding will continue for ACCORD’s counselling services.

The Bishop of Kildare & Leighlin said it would “undermine a vital service provided to women and men preparing for marriage”.

Demand for ACCORD marriage preparation courses has increased year-on-year over the last five years, with over 15,500 men and women participating in 2014.

“I am very disappointed that Tusla has made this funding decision,” Bishop Nulty said.

The director of the Iona Institute, David Quinn, described Tusla’s decision as “appalling and indefensible”.

Last January, Bishop Nulty along with a delegation from ACCORD met with the Minister for Children and Youth Affairs, James Reilly, and his officials to discuss key services such as marriage preparation and marriage and relationship counselling.

“We highlighted the fact that, since 2011, ACCORD’s grant aid has been reduced by more than 42% at a time when there has been an increase in demand for our services due to the harsh impact of the recession on families.”

Describing it as a constructive meeting, the Bishop said ACCORD’s request to reverse budget cuts was “received in a positive spirit”.

Bishop Nulty added, “In the light of our meeting with Minister Reilly, Tusla’s decision to withdraw funding for ACCORD’s marriage preparation courses from January of this year, is all the more baffling.”

The president of ACCORD said he would like to meet Minister Reilly again, as soon as possible, to ask for a reinstatement of funding for Accord’s marriage preparation courses.

“Marriage preparation helps to sustain the celebration of love which is at the core of the life-long commitment publicly declared by a woman and man, to each other, on their wedding day,” he said.

The announcement of the withdrawal of funding for ACCORD follows concerns expressed by a number of Catholic bishops that for the future of ACCORD and the ethos of Catholic schools if the referendum on marriage is passed later this month.

At the weekend, Bishop Leo O’Reilly of Kilmore warned, “I have serious concerns about the blunt refusal to give any real guarantees regarding freedom of religion in relation to the referendum.”

He also questioned whether teachers would be obliged, against their conscience, to teach the new understanding of marriage in schools?

In a reference to ACCORD, Dr O’Reilly asked if marriage counsellors and others who offer couples Catholic marriage care would be required to “provide services to those who are manifestly at variance with our ethos”.

The bishop also raised concerns about priests’ role as official solemnisers of marriage on behalf of the State, and whether they would be obliged to marry same-sex couples who request it.

“If a baker can be brought before the courts in Northern Ireland on such a trivial matter as refusing a request from a same-sex couple to supply a cake with a gay slogan, we can be sure that a priest will soon find himself in the same position here,” he commented.

His concerns echo those of the Primate of All Ireland, Archbishop Eamon Martin, who also expressed concern for the future of ACCORD.

In his message ‘Care for the Covenant of Marriage’, the Primate questioned if Catholic schools would be allowed to uphold the Church’s teaching on marriage if marriage is redefined.

In an interview with RTE Radio, he also questioned whether state funding would be withdrawn from ACCORD.

In last Tuesday’s RTE Primetime debate, a member of the Yes campaign appeared to support withdrawing funding from ACCORD as its services cater only for male-female couples. Noel Whelan implied this was discriminatory.

Speaking to RTE’s Morning Ireland last Monday, Archbishop Martin referred to how the Church had been forced to withdraw from adoption services in the UK because it wasn’t prepared to place children with same sex couples.

On Wednesday the Iona Institute issued a statement saying, “This decision certainly adds to fears already expressed by the Catholic bishops over what will happen to marriage counselling organisations that believe marriage can only be the union of a man and a woman.”

David Quinn added, “Now we see funding of marriage preparation courses axed even before the referendum takes place. Can the complete ending of State funding of ACCORD be far behind?

“Tusla will say this has been forced on it by Minister James Reilly’s decision to cut its budget. However, to simply end funding of ACCORD’s marriage preparation courses completely is beyond belief.

He said the decision calls into question the Government’s commitment to marriage. “How can the Government claim to be pro-marriage and at the same time do this to the organisation that provides the vast bulk of marriage preparation courses in this country?”

The Iona Institute statement concluded by calling on the Government to restore this funding forthwith.

“We call on the Opposition parties to demand that funding be restored. We make the same call to the Yes side generally. We ask that the Government guarantee that funding to ACCORD will continue, and that their ethos will be fully respected should the referendum be carried.”