A special commemorative walk throughout Ireland remembering the Irish monk Columbanus gets under way today, Sunday 4 June. The ‘Turas Columbanus’ is the Irish segment of the European Columban Way and will be led by Simon Derache, the coordinator of the European Cultural Path of Columban. 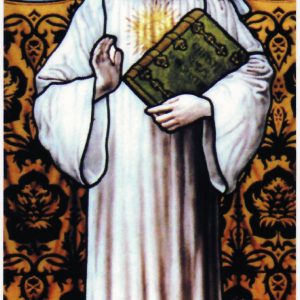 St Columban is arguably the best-known Irish person to have visited the European continent. Born on the Carlow/Wexford border about AD 543, he studied under Sinell of Cleenish, whose monastery was on an island on the River Erne, in modern Co. Fermanagh.

Later he joined the monastery at Bangor under the Abbot Comgall and was ordained a priest. At age 51, with a number of companions, he set sail for Europe to become a pilgrim for Christ. He later travelled all over Europe founding a number of monasteries.

In Saint Columbanus: Pilgrim for Christ, Fr Aidan Larkin gives a biographical sketch of the saint.

He writes that “The monasteries that he founded would multiply themselves. Figures vary, but around 60 is a reasonable claim for the number of monastic communities living under the Columban Rule in the following generation, in France; and, out of roughly 100 French diocesan sees, at least 12 would be occupied by his disciples.”

The walk will start from Bunclody in Co. Wexford and will pass through Carlow, Portlaoise and Cadamstown in Co. Laois over the course of the first week, before arriving in Ferbane, Co. Offaly on Friday 9 June. At the weekend it will make its way from Ferbane to Ballinamore Bridge in Co. Galway, before recommencing on Monday 12 June, when it will continue on to Mohill, Co. Leitrim.

The second week of the pilgrimage will see the walk travel through Bellanaleck, Co. Fermanagh, Lisnaskea and Clones, before arriving in Armagh on the second Sunday.

Finally, the third week of the walk will go through Newry, Newcastle and Downpatrick, reaching its final destination in Bangor on 24 June.

For more information on the walk, contact [email protected].