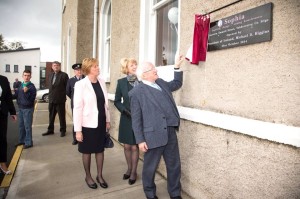 Speaking at the Marist Convent in Tubbercurry Co Sligo, where he was officially opening Sophia Housing’s Limeview Tubbercurry project, the President said “Homelessness involves a denial of the basic right to participate with dignity in society.”

He said the current level of homelessness stems from “a failure to distinguish between what are the basic needs of citizens and those wants appropriate to the markets”.

In his address, the President said a society in which approximately 2,500 persons depend upon State-funded emergency accommodation for a roof over their head each night is a society which is challenged to meet the standard of a truly inclusive republic.

Acknowledging that in recent months the issue of homelessness has moved to the centre of the debate both in the media and at political level, President Higgins said this was to be welcomed.

“It is a debate which has brought home to many citizens the very real deprivations that come with being homeless; the insecurity, anxiety, fear and lack of hope for the future.”

He said those who are homeless know, from lived experience, that citizens without a home inhabit a silent and lonely society in which their homelessness deprives them of a voice; of the right to participate, to seek and obtain employment, to offer their skills and talents to their communities and their wider society.

“Homelessness denies too many of our citizens a sense of place, of home, of neighbourhood, and they are entitled to expect of us the shared solidarity and responsibility, which is critical to our living together,” President Higgins said.

Referring to the new housing project he was opening, President Higgins said Irish society owed a great debt of gratitude towards providers such as Sophia Housing who “extend a lifeline of hope, friendship and care to those whose circumstances have brought them to that lonely and threatening place of homelessness.”

Recalling some of the personal accounts written by citizens who had been supported and accommodated by the Sophia Housing Association, the President said all of them were stories of lives which had been damaged by violence, addiction, abuse, poverty or other distressing issues which had pushed the writer into the dark shadows of our society, where they exist as marginalised citizens.

In his speech, the President said the holistic model of care followed by Sophia Housing is an impressive one which allows those who seek support to work as equal partners in their journey towards independence and fulfilment.

Fundamental to this model of care is the important recognition of the need for sustainable solutions to the complicated and distressing range of circumstances which can lead to homelessness.

It is a far reaching and all-encompassing approach that is to be both admired and commended.

Speaking afterwards, Declan Dunne, CEO of Sophia Housing said, “We are delighted to welcome President Higgins here today and to show him the services we provide to those at risk of becoming homeless in both Tubbercurry and indeed throughout Sligo county.”

He said Sophia Housing is “committed to helping these families and individuals to address the underlying issues that contributed to them finding themselves homeless and at risk of being homeless.”

“Sophia can inspire change from within and end their homelessness permanently by empowering people to address the challenges they face and to live independently. No one wants to be dependent on others and certainly not dependent on charity.”

“The people we support deserve the dignity every citizen has a right to. They are willing to make the huge effort required to tackle the challenges they face to become independent, to get a job, to actively contribute to society however they cannot do it without our support.”

“Supported housing works to help people address very complex needs and our qualified social care staff provide support to a detailed care plan based on an individual needs analysis and a key worker.”

Sophia provides 241 housing units across the country with an annual budget of €3.5 million.

Thousands of people have graduated to independent living having lived in these units at one time.

The Tubbercurry development provides 56 accommodation units; Lime Walk has 24 units and Limeview comprises of 32 apartments.
Sophia Housing also provides housing for people with an intellectual disability in Cairns Hill and Ballincar in Sligo and works closely with Wisdom Services at Cregg House.

Limeview was originally the Marist Convent in Tubbercurry, which operated as the main Secondary School with boarding facilities for the local and surrounding areas from 1914 up until 2002.

Sophia Housing now occupies the building and offers accommodation and support services to people at risk of being out of home.