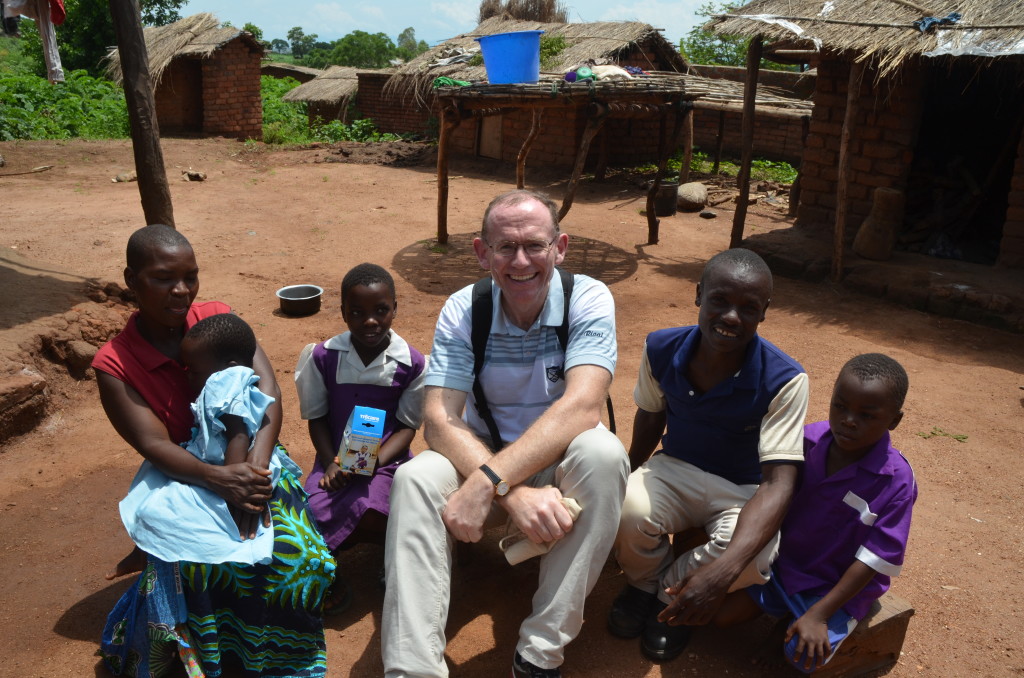 Tuam Diocesan Secretary, Fr Fintan Monahan and Enestina, who features in this year’s Trócaire Lenten appeal, and her family.

The people of the archdiocese of Tuam have contributed a staggering €7.9 million to Trócaire over the past twenty years.

Revealing this incredible sum, Diocesan Secretary, Fr Fintan Monahan, paid tribute to the people of the diocese who are “the most generous per capita in the country”.

He said it was “Incredible generosity in difficult economic times from a diocese of just 122,000 people.”

Fr Monahan recently returned from a Pastoral Mission to Malawi ahead of Trócaire’s Lenten Project which launches this week on Ash Wednesday.

This is the day each year when Trócaire boxes first make their appearances in homes, schools and churches and collections are held for those most in need in the developing world.

Recalling his visit to Malawi, where this year’s Lenten village is located, Fr Monahan said he could not praise the work of the staff from Trócaire highly enough.

“A series of excellent projects were on view and members of the delegation had the chance to meet the gracious, welcoming and dignified people of Malawi and also the wonderful people involved in the great work of Trócaire in this developing country.”

Malawi is a beautiful place with outstanding scenery – mountains, hills and at that time, the rainy season made it lush with luxuriant flora and greenery all round.

However, it also endures a dry season of around nine months and all the detrimental effects associated with that. 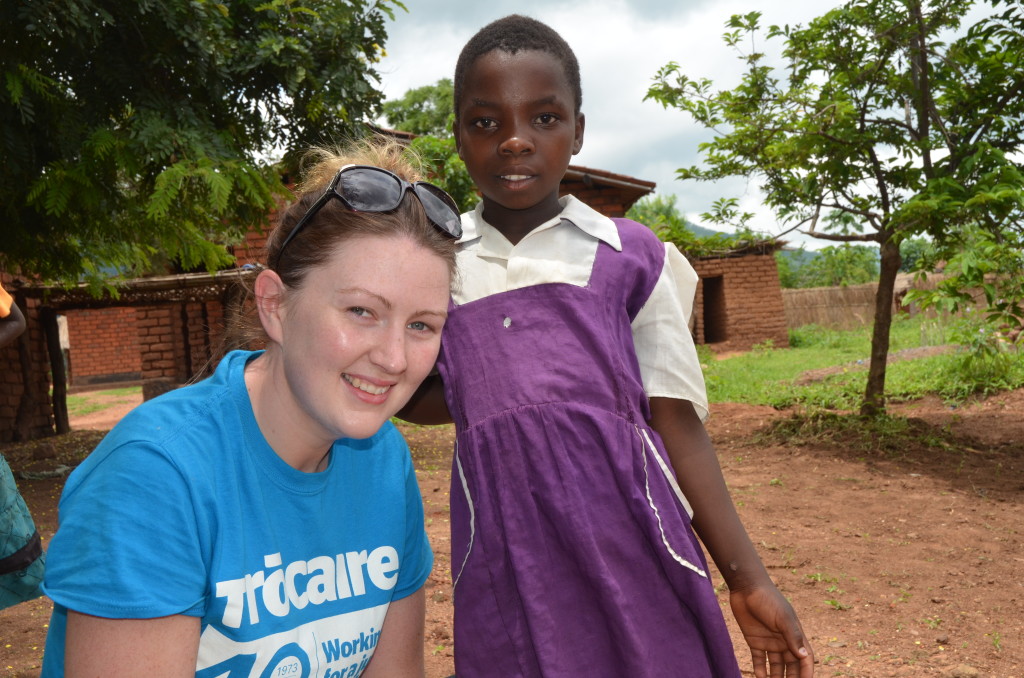 Hannah of Trócaire with Enestina.

The first destination for the visiting delegation was to Trócaire’s national office in Lilongwe where they met national director, Eithne Brennan, her staff.

Then it was onwards to Blantyre and Mua in the south.

Much of the work and resources of Trócaire is spent on training and empowering people to deal with local difficulties that cause them problems and suffering.

One ‘Men to Men’ project deals with issues of lifestyle, alcoholism, HIV/AIDS, behaviour within the home. Huge strides towards change have been reported. It is estimated that as many as 1 in 7 people are suffering from the effects of AIDS in Malawi.

Elsewhere, a ‘Women to Women’ project operates a village saving and trade scheme, helping women who are HIV positive and it also tries to empower local women to take a leadership role in the home and community.

Another project focuses on road building as part of an ongoing campaign to repair the road from Lirangwe, Chingale, Mathinga and make is passable for essential travel. It has strong support from the local bishop, Trócaire and local partners, CADECOM and CCJD, CARITAS and others.

The theme of the annual Lenten campaign this year is Water. The availability of clean, healthy water is a major international challenge.

In Ireland, we consume on average 150 litres of water per day. In some of the developing countries, individuals are lucky to have access to 24 litres of dirty water.

Trócaire’s campaign this year is working to highlight the importance of the provision of clean, healthy water for everyone at home and abroad.

As part of that campaign, the visiting delegation visited the Lenten Village in the Dedza region. For Fr Monahan, it was “the highlight of the trip”.

“There we met the little girl on this year’s Trócaire literature, Enestina and her family. A bore-hole or water pump has been installed and it has made a huge difference to the quality of life and health of the locals.”

“A donation given to me by a parishioner from Tuam will re-roof a section of the primary school and this was hugely appreciated.” 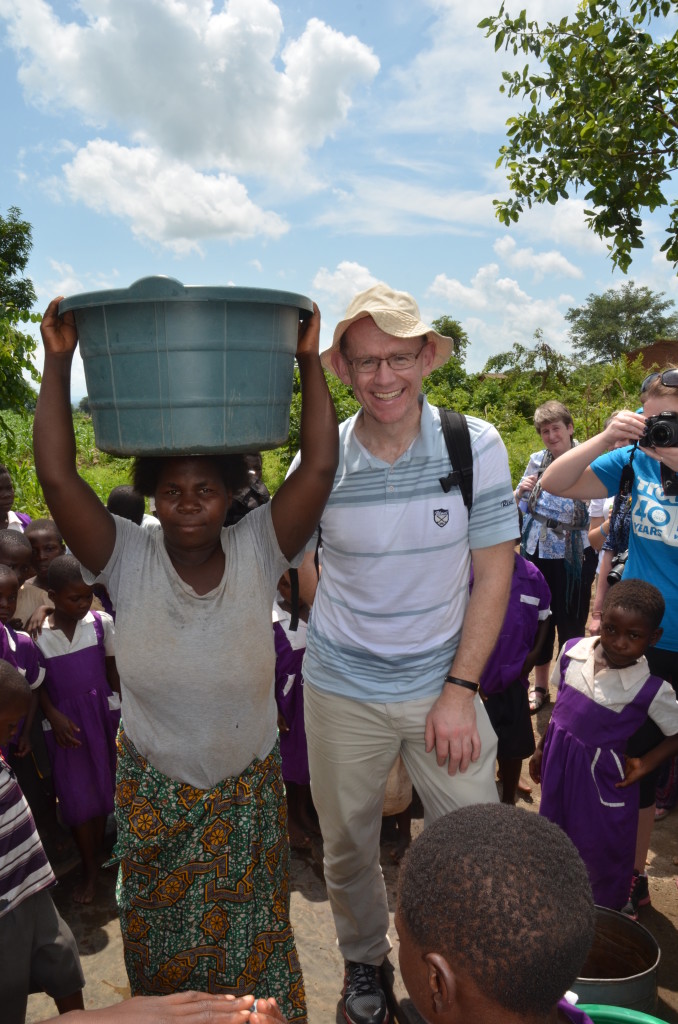 Fr Fintan at the bore hole in Dedza Diocese.

According to Fr Monahan, one of the most outstanding events of the trip was Sunday Mass in the Lenten Village.

“It was a lesson in how to celebrate a liturgy with vibrant joy and genuine celebration! Even though the Malawi folk have not much in material terms – they have a quality of faith, humanity, friendliness and happiness that left a deep impression on me and the other diocesan representatives,” he said.

Closer to home, Fr Monahan referred to the tightening up of policies and procedures for charities and charitable donations which have come under intense scrutiny in recent months in Ireland.

“Trócaire employ very strict controls on spending and follow up to date rules of best practice,” he said and added that fully audited accounts can be inspected on their website.

“They have a clear policy of allowing no more than 8% of income go towards administration and payment of salaries etc. All the remaining money goes directly to very worthwhile charitable causes.”

On Sunday 16 March, Trócaire are coordinating the RTÉ television Mass.  Students and choirs of the Diocesan Youth Council under Director, Trish O’Brien, will provide elements of the music and liturgy.

For the past 41 years, Trócaire, an agency of the Catholic Bishop’s Conference in Ireland has been working hard to alleviate poverty in over 20 countries and employs a few hundred people to engage in this important pastoral work.