Home > News > It was like the Troubles: Paris-based Irish priest 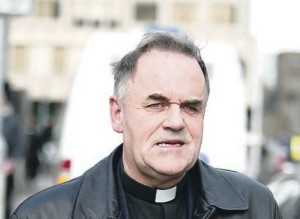 An Irish priest who is based in Paris and formerly ministered in Northern Ireland has said the terror attacks in the French capital on Friday night brought him back to what it felt like at the height of the Troubles.

Speaking to RTE news, Fr Aidan Troy admitted the attacks in France dragged him back to Belfast’s darkest days.

Fr Troy, who is a native of Co Wicklow, made headlines across the world during the 1990s in Belfast when he was seen guiding young children to the Holy Cross school in North Belfast in the wake of attacks from Loyalist protesters.

Speaking about the attacks he said, “I went on the street after it all started happening in Paris on Friday. I was careful, but I had to see. The blue lights were flashing and all I could think of was Belfast.”

“I was transported back; I could not help it because there I became familiar with violence, I know how it works, and now it is here.”

Speaking about Belfast he said, “When I left Belfast I thought that was a chapter of my life that had gone. However, I was wrong. I honestly never ever thought that the violence that I witnessed there would occur here.”

“I have had parishioners ringing and ringing, asking if it is safe to come to come to Mass. They are afraid to come out yet they have a need to be with people, to talk, be comforted and told that it will be alright.”

Fr Troy, who has been a member of the Passionist Order for almost 50 years, arrived in Paris to take up ministry at St Joseph’s Church on Avenue Hoche, in the shadow of the Eiffel Tower, in 2007.

It followed a seven-year term in Belfast where his ministry in Ardoyne had spanned the Holy Cross Protest Walks (2001) and a blight of suicides (beginning in 2003).

St Joseph’s Paris is a far cry from Holy Cross Ardoyne. The parishioners all live outside the parish, often travelling 25 to 30 kilometres to attend church at the weekend and represent some forty different nationalities.