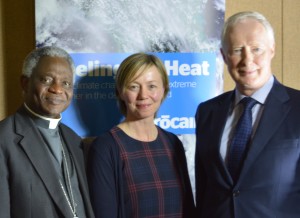 Trócaire’s head of policy and advocacy, Dr Lorna Gold, will act as Moderator during a two-day conference in the Vatican this week where the issue of climate change will be central to discussions.

The conference is organised by the Pontifical Council for Justice and Peace and the International Alliance of Catholic Development Organisations (CIDSE).

It will bring together Church leaders, decision makers, scientists as well as a wide range of representatives of Catholic and civil society organisations from different regions of the world.

Over Thursday and Friday, delegates and speakers will focus on the publication of Pope Francis’ encyclical Laudato Si and its guidance for the struggle against climate change and towards economies and lifestyles that ensure the well-being of the earth and a dignified existence for everyone.

They will also address upcoming key political moments in 2015 such as the Third international conference on Financing for Development in Addis Ababa in July, the United Nations summit for the adoption of the Post-2015 sustainable development framework taking place in New York in September, and the climate negotiations towards COP 21 in Paris.

Today at 11.30am, a press conference about the conference will be live-streamed by CIDSE, the international alliance of 17 Catholic development agencies working together for global justice, of which Trócaire is a member.

Speakers at the press conference include:

Web streaming is available at: http://www.vatican.va/news_services/television/index_it.htm

Trócaire’s Executive Director Éamonn Meehan will attend the proceedings as well as Dr Gold. Others travelling out to the conference from Ireland include Professor John Sweeney of Maynooth University and climate activist, author and Columban missionary, Fr Sean McDonagh.

One of the keynote speakers over the two days is the former president of Ireland, Mary Robinson, who is also the UN Special Envoy on Climate Change. She will address the conference on ‘People and Planet First: the Imperative to Change Course’ on Friday.

The opening session of the conference on Thursday morning is moderated by Dr Gold, while the opening prayer will be given by Mgr Theotonius Gomes from Bangladesh, who addressed last week’s Climate Justice conference in Maynooth.

Cardinal Peter Turkson, President of the Pontifical Council for Justice and Peace, will give the opening address on, ‘The integral ecology and the horizon for hope in light of the Holy Father’s Encyclical letter Laudato Si on care for our common home’.

The second session of the conference on Thursday will see Vatican Secretary of State, Cardinal Pietro Parolin, give an address on ‘The Importance of the Encyclical Laudato Si for the Church and the World, in the Light of Significant Political Events in 2015 and Beyond’.

This session is moderated by Neil Thorns, director of advocacy and communications at CAFOD and the Prime Minister of Tuvalu, Mr Enele Sopoaga, will give a special address.