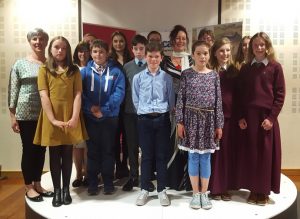 The finalists in Trócaire’s annual poetry competition, run jointly with Poetry Ireland, gathered at the National Library in Dublin on 26 May last to share their award-winning work.

The competition, which is held annually, uses the arts to raise awareness about the leading global justice issues of the day.

It is open to entries from mid-January to Easter each year, with an awards ceremony in the National Library of Ireland in May.

Poets of all ages, as well as those published and unpublished, are welcome to participate.

This year’s theme was ‘Forced to Flee’ which inspired a moving and thought-provoking selection of poems on the themes of displacement and seeking refuge.

According to Trócaire, “A great human tragedy continues to unfold in Syria and in the wider Middle East.”

The charity said that over 250,000 people have died in the Syrian conflict, 12 million are homeless and more than 4 million of them are refugees, mostly in Turkey, Lebanon and Jordan.

“A river of distressed humanity flows into the heart of Europe from this conflict. While the overwhelming European response is to welcome these people, there is also a realisation that something important and irreversible in taking place before our eyes.”

“It is the strong sense that we can no longer isolate ourselves in our secure and wealthy fortress Europe from the rest of a humanity suffering poverty, war and injustice.”

The poetry competition is funded through Trócaire’s Irish Grant Scheme (Mobilising for Justice), which is designed to support community and voluntary organisations in Ireland to take action on global justice issues.