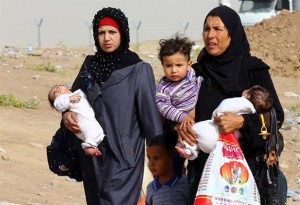 The head of Trócaire has welcomed the Government’s decision to receive into Ireland 4,000 refugees fleeing conflict.

In a statement on Thursday, Eamonn Meehan, Executive Director of Trócaire, said the decision is a positive step, especially considering that just two weeks ago the number being talked about was in the hundreds.

“We are only now realising the full extent of the crisis and it is important that Ireland’s response meets its severity and scale,” he said and added that it is “heartening to see that priority will be given to unaccompanied minors and that family reunification will be supported”.

Referring to the out-pouring of generosity and compassion from the public, Mr Meehan said it had been “remarkable” and showed how communities all over Ireland will welcome these refugees and help them settle.

“It will be important that they are fully integrated into our schools, our sports clubs and our society generally. The Government will now hopefully develop and implement a transparent and accelerated process of relocation and resettlement, with clear guidelines and time frames in place.”

“The scenes we have seen in Europe over recent weeks and months should remind European leaders of the urgent need to stop the war in Syria. Ireland needs to take a lead within the EU to make ending the conflict a priority and can play a strong role by pushing for renewed peace efforts at a European level.”

The decision on refugee numbers was made at a Cabinet meeting on Thursday morning.

The number breaks down as follows: 2,900 additional persons on top of an earlier commitment this year to take in 600 under the proposed EU relocation programme, plus 520 programme refugees currently being resettled to Ireland under a previously-agreed scheme.

The scheme is due to run for two years.

As Trócaire highlighted, priority will be given to unaccompanied minors.

Each person granted refugee status is entitled to have their families come and settle in Ireland under reunification regulations.