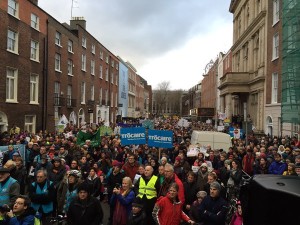 Trócaire has called on the Taoiseach Enda Kenny to show leadership when he addresses the opening stages of the UN Climate Summit in Paris today.

The aid and development agency said Mr Kenny needs to signal Ireland’s intention to sign-up to an ambitious and legally-binding deal that would phase-out fossil fuels by mid-century.

Thousands of people took part in marches on Sunday in Dublin, Cork, Belfast and Galway to call on the Government to show international leadership on climate justice at the UN Climate Summit which gets underway today.

In Paris itself, climate activists laid out more than 20,000 pairs of shoes in the Place de la Republique to symbolise absent marchers, after demonstrations were banned following the recent terror attacks.

Among the shoes were a pair of plain black shoes sent by Pope Francis, who has strongly advocated for more concerted efforts to address the ecological damage and injustices to the world’s poorest caused by climate change.

Up to 10,000 people formed a human chain through Paris along the footpaths of the route of the banned march.

Trócaire has described climate change as one of the leading drivers of poverty and hunger in the developing world, and has said that attempts to battle hunger will prove futile until world leaders take on the responsibility of decarbonising our societies.

Ireland is the 36th highest carbon dioxide emitter in the world on a per capita basis, higher than both China and India, according to the World Bank.

In Paris, Éamonn Meehan, Executive Director of Trócaire, said on Sunday, “The fact that these talks are being held at a time when millions of people all along the eastern seaboard of Africa are experiencing chronic food shortages due to drought highlights exactly what is at stake. If millions of people experiencing hunger due to drought can’t motivate political leaders to take action, one wonders what can.”

“Climate change is not just an environmental issue, it is an issue of justice and equality.”

He warned that it was eroding people’s human rights, including the right to food.

It is estimated that 2.5 billion smallholder farmers provide 80 percent of the food consumed in southern Asia and sub-Saharan Africa.

The vast majority of them are dependent on rain to grow their crops but climate change is altering rain patterns and extending droughts.

“We urgently need a legally-binding agreement to reduce greenhouse gas emissions, and we also need to ensure that this agreement is rooted in human rights and protecting vulnerable people’s access to land and water,” Éamonn Meehan warned.

He also called for a renewed funding effort to help countries affected by climate change to adapt.

“The climate challenge facing many of the poorest countries on Earth is both significant and costly. New and additional climate financing is vital to ensure developing countries already impacted by climate change can increase their resilience.”