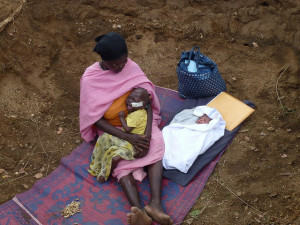 The Trócaire supported Mother of Mercy Hospital in the Nuba region of Sudan has been attacked by the Sudanese Air Force.

This is the first time the hospital has been targeted and doctors and patients fear further attacks as government forces push north into the region.

The bombing has been strongly condemned by civil and church humanitarian groups.

In a statement on Facebook, Trócaire wrote “We condemn the bombing by the Sudanese military of a hospital we support in the Nuba Mountains region which borders South Sudan.”

“The hospital, which provides life-saving care to 150,000 people caught in the crossfire in a conflict between the government of Sudan and the SPLM-N rebel group, has come under sustained aerial attack over recent days, with damage caused to the building and injuries sustained by staff and patients.”

Trócaire continued that the hospital operates with the support of donations from the Irish public.

It was hit by five bombs dropped from the air on Thursday (1 May) and again on Friday. The charity stated that the hospital is still functioning despite these attacks, with an estimated 1,000 people in the facility.

The local bishop has also spoken out.

Bishop Emeritus Macram Max Gassis of the Diocese of EI Obeid said “The bombing is an outrage against innocent civilians who are seeking medical assistance from our hospital.”

“The sick have nothing to do with the conflict that has devastated the Nuba Mountains since June 2011. They are innocent civilians protected by international law from direct targeting by military forces,” he said.

“International law demands that civilians are protected during conflict, but the attack today is a direct violation of this fundamental humanitarian principle. It is a violation of the sacredness of all human life, which we must protect at all costs.”

The hospital is supported by Caritas Internationalis and in particular Caritas members, Trócaire and Secours Catholique.

It is the only functioning hospital in the Nuba Mountains of South Kordofan State, which provides essential care and a variety of support services to over 150,000 people annually.

Bishop Macram Max Gassis fears for the safety and well-being of hospital staff and patients, and communities living in fear of this very real threat of indiscriminate aerial bombardment.

“I wish to appeal to President Omar EI Bashir, whose air force carried out this bombing, to ensure that our hospital is protected from further bombing. The Mother of Mercy hospital is a Catholic Church health institution which offers life-saving services without distinction based on religion, tribe, or political affiliation,” he said.

Bishop Gassis said that the Diocese of EI Obeid is committed to peace in South Kordofan.

He appealed against the continued use of indiscriminate aerial assault. The bishop said all parties in the conflict needed to commit to peaceful dialogue so that a just and peaceful solution could be found.

A staff member stated that although there is no significant structural damage to property many repairs will be required as doors and windows have been blown out, the roof damaged and the fence destroyed.

The attack has terrified the local people and at the time of writing the male ward had started to trickle back, but the female and children’s ward are still nearly empty. Everything was quiet and covered in a film of dust.