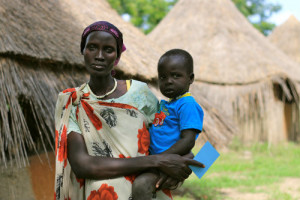 Trócaire has suspended vital aid work and hastily evacuated three staff  from an area of South Sudan due to heavy fighting.

The three staff are all South Sudan nationals and they were forced to seek shelter in a UN compound in the area before being evacuated to Juba during the week.

“Our office in Melut, which is in the north of the country, has been broken into and badly looted as government and anti-government forces fight for control of the region. We have been forced to suspend our humanitarian programmes in the region, which had been delivering aid to 20,000 people in two towns,” Trócaire stated.

The evacuated staff members said they heard constant shelling while they were in the compound.

The UN also reported that four displaced people sheltering in the ‘protection’ section of the compound were killed and eight people injured.

Until the latest outbreak of fighting, the joint programme between Trócaire and CAFOD, Trócaire’s sister organisation in England and Wales, was delivering humanitarian aid to more than 20,000 people through Caritas Malakal.

“Ordinary people are bearing the brunt of this renewed fighting, which only serves to deepen and prolong their suffering, as they flee to escape attacks by government and opposition forces,” stated Trócaire.

The charity cautioned communities must be protected, and not become military targets and that charities can continue work with vulnerable communities.

Fighting between the government of President Salva Kiir and his former vice president, Riek Machar broke out in Juba during December 2013 and has since spread across the country. An estimated one million people have fled from their homes, and thousands have been killed. 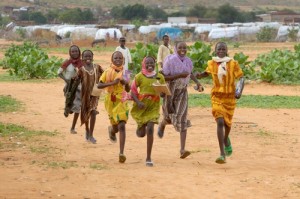 Girls hurry to school in the Dereig Camp for internally displaced persons. The camp’s schools are supported by ACT-Caritas.

“Now is not the time for the world to walk away from South Sudan. The people more than ever deserve our concerted attention and efforts; inaction is not an option,” the charity stated.

Agenzia Fides has quoted the South Sudan Council of Churches as stating that: “People are being killed, raped and tortured… Children are being recruited into armed groups and looting is endemic.”

“There is no moral justification for the killing to continue”, said the Council’s message, adding: “it is unacceptable for negotiations about power and positions to take place in luxury hotels while people are still killing and being killed”.

The church leaders were doubtful that South Sudan’s military and political leaders, “most of whom call themselves Christians” would stop the fighting.

However, they warned that people at home and the international community would know they are watching and aware of what is happening.

In December 2014, CAFOD published a report from Caritas Malakal stating that there had been an upsurge in violence since the end of rainy season in October in the Upper Nile, Unity and Jonglei states, resulting in people fleeing.

Caritas /CAFOD were helping people like Nyabat who fled with her family when her village was attacked. “We arrived here empty-handed, and we had no time take any of our possessions,” she said.

They received food for children, the elderly and the sick. “We were also given other useful items such as blankets, cooking pots and mosquito nets, and the Caritas Malakal team are also helping us with good hygiene, by building latrines. But we are also helping ourselves. The women come together and collect firewood and grass for thatching which we sell where we can. Many of us women have lost our husbands in the war. We need peace,” she said.

In the December 2014 report CAFOD’S Country Representative for South Sudan, Jane Andanje, said: “This year (2014) most people were not able to plant crops, so there will be no harvest in the coming months and no food stored.

Around one million people are expected to face dangerous levels of food shortages.”

Only months earlier in September 2014 UNICEF reported that South Sudan was in danger of falling into famine.