Trócaire responding to Beirut disaster – but your support is desperately needed

The Irish aid agency Trócaire is at the centre of the emergency humanitarian responses to the explosion that destroyed much of Beirut last Tuesday.

More than 150 people are known to have been killed in the blast and at least 5,000 injured in the explosion caused by the ignition of a 2,700 tonne stockpile of ammonium nitrate stored in the Lebanese capital’s harbour district. The blast radius meant that some 300,000 people have been left homeless.

Already Trócaire is responding to the situation via its local partner, Caritas Lebanon. Not only is the aid agency distributing food and water, but it is assisting with the clean-up operation in the vast area affected by the disaster – it is said that some windows were shattered 24km away from the epicentre.

“Everything had been destroyed. There were people covered in blood around us, cars had been flattened” reported Trócaire’s Head of Programmes, Alison Heron, who is based in Beirut. “It’s devastating walking around the city now. East Beirut has been decimated, there’s not a building unharmed.

“I don’t know how I came out of it basically unscathed. I just had a few glass wounds and a bump on my head. It feels like a miracle. I’m lucky to be alive.”

Thankfully, all of Trócaire’s staff and local partners in the Lebanon are safe and accounted for, Heron reports.

The Irish aid agency has a presence in Lebanon because of the country’s worsening local economy and because of the fact that Lebanon is a temporary home to more than a million Syrian refugees. Indeed, per capita, Lebanon has generously accommodated more people fleeing the Syrian civil war than any other country.

However, the country, which needed to be completely rebuilt following years of civil war, has been suffering economic difficulties in recent times because of government mismanagement. 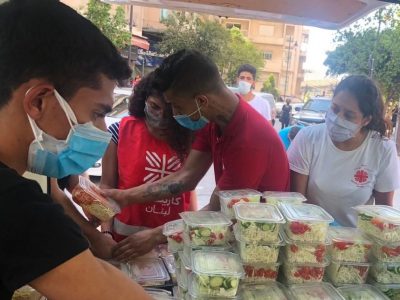 “There are a lot of dead and a lot of injured, and the health situation is likely to worsen quickly, as the toxic gases can cause additional health problems” says Rita Rhayem from Caritas Lebanon.

“The situation is critical and this is the first time that we have experienced a situation of such great magnitude. It is apocalyptic, but we don’t stop and we will carry on in order to help all those in difficulty”.

Trócaire is making an emergency appeal to help rush urgent supplies and assistance to those who need it most.

Trócaire director Caoimhe de Barra said: “Your generous support and solidarity can provide hope in this time of crisis.”