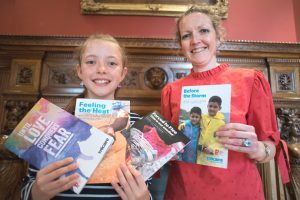 Elise Carey-McGibney from Fenit, Co Kerry has had three winning poems over the years, and her mother Lorraine won an award for her own poetry last year. Photo: Garry Walsh

Four awards have been received to date by one family in the Trócaire Poetry Ireland competition.

Elise Carey-McGibney from Fenit, Co Kerry, has had three winning poems over the years, and her mother Lorraine won an award for her own poetry last year.

Elise won the Primary (school) Senior award this year for her poem ‘The Sea of Hope’ about a group of families who evacuate their burning town, and hope for a better future across the sea.

“It’s such a thrill for the youngest children here to have their work published in a booklet alongside well-known Irish poets,” Trócaire director Eamonn Meehan said at the awards event.

The poetry competition “creates a synergy of wisdom, creativity and talent, which encourages young minds to keep exploring ways to make our world a better place,” he added.

The annual competition uses poetry to raise awareness about the global justice issues.

This year’s poetry competition, in partnership with Poetry Ireland, received a wide very range of submissions and primary school pupils and post primary students and their teachers tackled the theme with “creativity and gusto,” the organisers stated.

The theme this year was ‘Until Love Conquers Fear’, and entries were judged by Aidan Clifford, formerly of the CDETB Curriculum Development Unit, poet Nessa O’Mahony, and Trócaire’s Patricia Groves.

Maureen Kennelly, director of Poetry Ireland, was present for the awards ceremony. 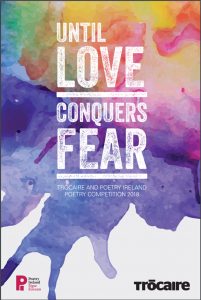 Experienced published poets, budding talents and everybody in between, mixed with primary schoolers and secondary school students at the awards event for the 2018 competition in Dublin last Friday (25 May).

They came from all over Ireland and their topics were varied but had the same theme: ‘Until Love Conquers Fear’.

The Adult Published (poet who has already been published) category winner was Daragh Bradish and his poem ‘Disclosure’ is described as a powerful study of gender dynamics in a small village.

The Adult Non-Published winning poem was ‘Ainganiff’ by John Donaghy and this is a story of how simple acts of love can unite communities. 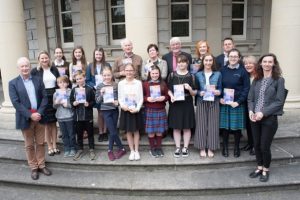 All the 2018 winners together with Eamonn Meehan, Trócaire executive director, and Maureen Kennelly, director of Poetry Ireland. Photo : Garry Walsh

In the schools section there were four winning poems:
-Post-Primary Senior – ‘Blanket’ by Jade Moore – using metaphor to explore how a mother’s love is carried across and through time.
-Post-Primary Junior – ‘The Olive Tree’ by Sinéad O’Reilly – a young boy’s reflections on a peaceful past, now destroyed by conflict, and his dreams for the future.
-Primary Senior – ‘The Sea of Hope’ by Elise Carey-McGibney – a group of families evacuate their burning town, and hope for a better future across the sea.
-Primary Junior – ‘Love Conquers Fear’ by Jude Rogers – a joyful moment when a frightened young boy is comforted by his dog.

A joint runner-up in the published poet section was Eileen Casey who wrote:

“Poems detonate hope in those who are cast down,
who hide in fear along remote hillsides. Poems
are sturdy vessels when put to sea, strong enough
to navigate stormy waves, rebuild war torn cities
so rubble becomes sturdy foundations.”