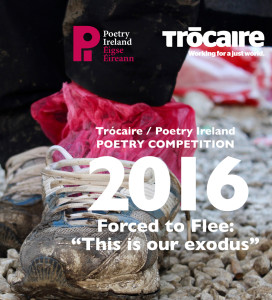 Forced to Flee: This is our exodus is the theme of Trócaire and Poetry Ireland’s annual poetry competition.

Organisers have called on poets to reflect in their poems the wider issues around refugees forced to flee war and climate change.

“It is not just about what is happening in the refugee crisis. It is about the root of many of the problems of the world. Conflict and climate change are so connected,” said Trish Groves, Trócaire’s competition organiser, and a competition judge.

“Climate change and conflict force people to leave their homes. So when you look at the impact, it is not just about weather, it’s about undermining the structures of society.”

The competition was born out of Trócaire’s schools programme over a decade ago.

In school workshops, poems and stories were written by children to explore development issues so it was decided to include adults and have a wider competition.

Children and teenagers have been prominent in the competition since it started. 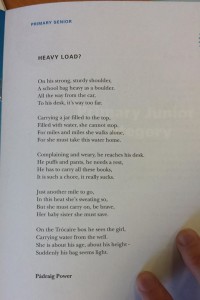 In 2013, Pádraig Power from Tipperary, then aged eleven, wrote a poem called ‘Heavy Load’, inspired by a Trócaire story about how millions young girls have to carry water for their families every day.

Comparing their load to his schoolbag, it suddenly felt lighter. His winning poem was published on Facebook to mark World Water Day and World Poetry Day, and it reached over 600,000 people.

It also spilled over onto Twitter, and even the children’s laureate complimented Padraig on his poem.

“It is broadening the conversation, poets are like teachers, what they write gets out there when it is heard it is shared,” said Trish Groves.

She added that a press release about an issue can garner some interest, “but it doesn’t touch the heart in the same way as poetry which touches the heart and the spirit. Poets take time out to reflect on an issue and to think about it and express it through the use of language, we find that very powerful.” 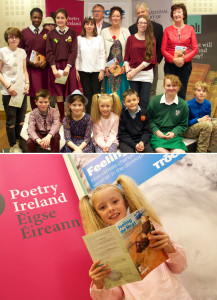 The poetry competition enables Trócaire to promote exploration of global justice through art among young people in schools and libraries.

It also connects to the formal schools’ curriculum across many subjects, including Geography and English.

This year it will feed into the Trócaire’s Lent campaign which will encourage young people to write for the competition.

This year’s judging panel includes Jane Clarke, a winner in the 2015 and 2014 competitions.

Each year, the winning poems are published in booklet form and presented to the winners at the awards ceremony.

The booklets are also distributed at events throughout the year, including poetry readings, Culture Night, literary festivals and schools workshops, ensuring a wide readership.