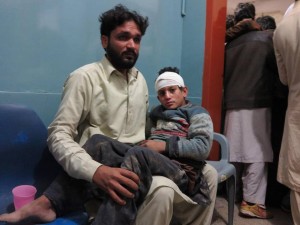 Catholic aid agency Trócaire has said its staff on the ground in Pakistan is already assessing the needs in a response to Monday’s earthquake which struck both Afghanistan and Pakistan.

John O’Brien, Trócaire’s Country Director in Pakistan, was in the city of Islamabad when the 7.5 magnitude earthquake struck.

The death toll in northeastern Afghanistan on Monday night had risen to over 200, and there are fears that this may rise higher.

In Pakistan, 102 deaths were reported by early evening, most of them in northern and northwestern regions bordering Afghanistan.

However, phone networks have been badly damaged in the affected areas, which is hampering the communication of information about the scale of the casualties and damage.

At least 12 girls were killed in a stampede at their school building in the Afghan province of Takhar, close to where the tremor’s epicentre was located.

Speaking from Pakistan, John O’Brien of Trócaire said, “We felt the impact of the quake for almost two minutes. All our staff are safe and our immediate priority is establishing contact with our partners in the affected areas to assess the scale of the impact.”

“Our fear is that this number will rise significantly … as the true extent of the damage becomes known.”

There are warnings of possible aftershocks over the next 24 or more hours.

“We work with three partners delivering ongoing programming in the area and four additional humanitarian partners with experience of working in the area so we are ready to respond through them,” the Trócaire spokesman said.

Last April, Nepal suffered its worst quake on record where as many as 9,000 people lost their lives and 900,000 homes were damaged or destroyed.