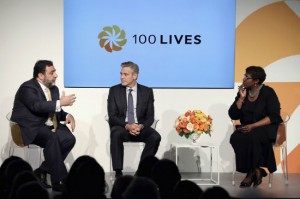 Trócaire has been named as a potential recipient of funding from the high profile Aurora award which is co-chaired by actor George Clooney and Nobel Laureate Elie Wiesel.

If successful, the bishops’ development and humanitarian agency could share the $1m (€890,000) for its efforts to eradicate bonded labour, a form of modern slavery, in Pakistan.

Four individuals have been nominated for the inaugural Aurora Prize, with the $1m award being donated to an organisation nominated by the eventual winner.

Trócaire has been nominated by Syeda Ghulam Fatima, a Pakistani human rights activist who has worked tirelessly to end bonded labour in her country.

If Syeda Ghulam Fatima is named Aurora Prize Laureate, Trócaire will share the $1m prize with the Human Rights Commission of Pakistan (HRCP) and the Bonded Labour Liberation Front (BLLF).

Selection Committee Co-Chair George Clooney will announce the inaugural Aurora Prize Laureate during a ceremony in Yerevan, Armenia on 24 April 2016.

Responding to the news, Trócaire Executive Director Éamonn Meehan said, “Syeda Ghulam Fatima is committed to ending slavery in Pakistan. She is a woman of deep integrity and compassion, whose extraordinary conviction has driven her to work for over 40 years to end slavery in Pakistan’s brick factories.”

“Trócaire has supported Fatima to establish Freedom Centres where workers receive healthcare, education, awareness on rights, physical protection and legal services. Her efforts to date have freed more than 80,000 people.”

“Trócaire is honoured to be nominated as part of this award. The funds would greatly assist us in continuing our work to end slavery in Pakistan.”

Trócaire’s Pakistan Country Director John O’Brien commented highlighting that Trócaire has been fighting for the rights of bonded labourers in Pakistan since 2007.

“We are committed to working with others to abolish this form of modern day slavery. Fatima has made an enormous contribution to the advancement of rights in Pakistan and we are honoured that she selected Trócaire as a potential beneficiary of this award,” he said.

The four finalists for the inaugural Aurora Prize are:

Marguerite Barankitse of Maison Shalom and REMA Hospital in Burundi: Marguerite Barankitse saved thousands of lives and cared for orphans and refugees during the years of civil war in Burundi. To date, she has saved an estimated 30,000 children and in 2008, she opened a hospital which has treated more than 80,000 patients thus far.

Dr Tom Catena of Mother of Mercy Hospital in the Nuba Mountains of Sudan. Dr. Tom Catena is an American physician and the sole doctor of the Mother of Mercy Hospital in rebel-held territory in the Nuba Mountains, Sudan. Despite several bombings by the Sudanese government, Dr Catena resides on the hospital grounds so that he may be on call at all times.

The four finalists were each asked to shortlist up to three organisations that they would nominate for a share of the $1m award if they are named Aurora Prize Laureate.

The winner will be chosen by a selection committee which includes George Clooney, Mary Robinson and four Nobel Laureates, including Elie Wiesel.

The full list of organisations nominated for the $1m funding:

TRÓCAIRE: Trócaire, one of Ireland’s leading development organizations, has worked internationally for over 40 years providing support to people living in extreme poverty, enabling them to take control over their own lives and live free from injustice and oppression. Trócaire works in over 20 countries across Africa, Latin America, Asia and the Middle East.

BONDED LABOUR LIBERATION FRONT (BLLF): Syeda Ghulam Fatima leads the Bonded Labour Liberation Front Pakistan (BLLF), which has liberated 80,000 Pakistani slaves who were forced to work for brick kiln owners in order to repay debts. The interest rates are too high for workers to pay off, trapping the workers in forced labour and poor—often brutal—conditions.

HUMAN RIGHTS COMMISSION OF PAKISTAN (HRCP): The Human Rights Commission of Pakistan was established in 1987 and grown into an influential, country-wide human rights body. HRCP works in very challenging situations and faces regular threats from those opposed to its work. Among the wide range of human rights issues that the organization works on, HRCP chooses to focus on those that affect the most vulnerable – including the persecution of religious minorities, extra-judicial killings, bonded labour and the status of women.

FONDATION DU GRAND-DUC ET DE LA GRANDE-DUCHESSE DU LUXEMBOURG: In her role as UNICEF Eminent Advocate for Children, H.R.H. the Grand-Duchess of Luxembourg visited Burundi in June 2009, where she bore witness to the inhumane detention conditions of children incarcerated in adult prisons. With the assistance of Marguerite Barankitse and her committed staff from the Maison Shalom, the organization has helped to secure the release of 600 children imprisoned throughout Burundi and provided services to aid their rehabilitation and reintegration.

FONDATION JEAN-FRANÇOIS PETERBROECK (JFP FOUNDATION): The JFP Foundation combats child poverty, discrimination and injustice – in particular abandoned or displaced children, orphans and victims of child labor, conflicts or social poverty. Since its creation in 2006, the JFP Foundation has supported more than thirty projects around the world. The first of them was Marguerite Barankitse’s Maison Shalom in Burundi and the JFP Foundation also helped towards the construction and operation of Marguerite’s REMA Hospital.

FONDATION BRIDDERLECH DEELEN LUXEMBOURG: Fondation Bridderlech Deelen is the Catholic aid agency of Luxemburg. For 50 years, Bridderlech Deelen has fought poverty and injustice and stood up for those in need – regardless of their religion, ethnicity or gender. Together with local partners in Latin America, Africa and Asia, Bridderlech Deelen works towards sustainably improving the living conditions of disadvantaged members of society.

CATHOLIC MEDICAL MISSION BOARD (CMMB): CMMB is an international, faith-based NGO providing community based, long-term, humanitarian and development aid to communities affected by poverty and especially inequities and unequal access to healthcare. A share from the Aurora Prize would enable CMMB to invest in the Mother of Mercy Hospital’s infrastructure and training for staff, as well as deliver more Interagency Emergency Healthcare Kits (IEHKs) to support Dr. Catena’s patients. The kits provide significant support as each one contains all of the essential medicines needed to serve a population of 10,000 people for three months.

DIOCESE OF EL OBEID: The Diocese of El Obeid is one of the largest Catholic Diocese in the world, covering an area of more than 340,000 square miles. The Diocese opened the Mother of Mercy Hospital in March 2008, the hospital has treated more than 200,000 patients since its inception. Dr Tom Catena initially joined the hospital when it opened and has remained despite the outbreak of civil war in June 2011. The Diocese relies on donor funding to run its activities and missions, including the Mother of Mercy Hospital.

L’ORDRE DES SERVITEURS DES MALADES (ORDRE DES CAMILLIENS): The Order of the Ministers of the Sick was founded by St. Camillus de Lellis in the year 1586, today the Ministers of the Sick are known throughout the world as the ‘Camillians’. The Camillians is made up of about 1,200 members who work in many countries around the world. Faithful to their mission, they place especial emphasis on care for sick people, even where there is a risk to their own lives.

2. On behalf of the survivors of the Armenian Genocide and in gratitude to their saviours, the Aurora Prize for Awakening Humanity will be granted annually to an individual whose actions have had an exceptional impact on preserving human life and advancing humanitarian causes. The Aurora Prize Laureate will be honoured with a US $100,000 grant. In addition, that individual will have the unique opportunity to continue the cycle of giving by nominating organizations that inspired their work to receive a US $1,000,000 award.

4. Further information is available at www.auroraprize.com