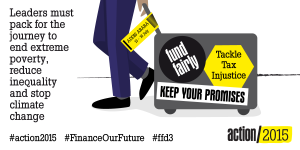 Trócaire has called on the Irish Government to show leadership and recommit to its long-standing promise to give 7c out of every €100 of gross national income (GNI) to the world’s poorest people.

The aid agency’s representatives are at the Financing for Development summit in Addis Ababa this week in advance of the September event where UN member states will set new Sustainable Development Goals (SDGs).

The goals come into effect in January and will set targets for UN member states around issues such as ending poverty, promoting peace and taking action to combat climate change.

How these will be paid for is the topic on the table this week. 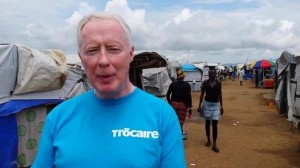 The conference “is a critical time for building solid foundations for the Sustainable Development Goals” and “Ireland, as a matter of urgency, must play its part in ensuring that the goals are adequately financed,” said Eamonn Meehan, Executive Director, Trócaire.

He added, “Despite the need for substantive additional funding to meet the SDGs, few have met their existing aid commitments to give 7c in every €100 of GNI in aid. Indeed many rich countries, including Ireland, are going backwards.”

“Funding is essential to make the new SDGs happen. If there is no money, there will be no progress. Poorer countries need support, they need investment, tax justice and development cooperation,” he said.

“Political leadership of the highest order is urgently needed. Ireland, as co-facilitators of the SDG process in September, has a vested interest in success in Addis Ababa and should make a firm promise to the poorest people on earth to honour its commitment to give 0.7% of GNI in aid by 2020.”

A week ago (8/7/15) at the launch of the 2014 Irish Aid Annual Report, Foreign Affairs Minister Charlie Flanagan said that the Irish Government has protected the aid programme during some of the harshest years ever, and that it is firmly committed to the programme and “to making progress” on the UN target of providing 0.7% of GNP for development assistance.

He said that the target will be reached gradually and he hoped that more progress will be made in the next seven years.

Dr Lorna Gold, Head of Policy at Trócaire, who is attending the summit in Addis Ababa, said that after two years of the UN fine-tuning the vision of a new SDG world, urgent action is needed to address mass migration, growing inequality, absolute poverty, climate change, war, terrorism and resource conflicts.

“Addressing these collective challenges requires that governments think beyond the interests of their own country to work together and make necessary sacrifices to address the common good.”

“It is essential that real and binding aid commitments are made if the SDGs are to be successful.”

If member states agree the draft set of 17 SDGs at a UN summit in New York in September, they will become applicable from January 2016. The expected deadline for the SDGS is 2030.