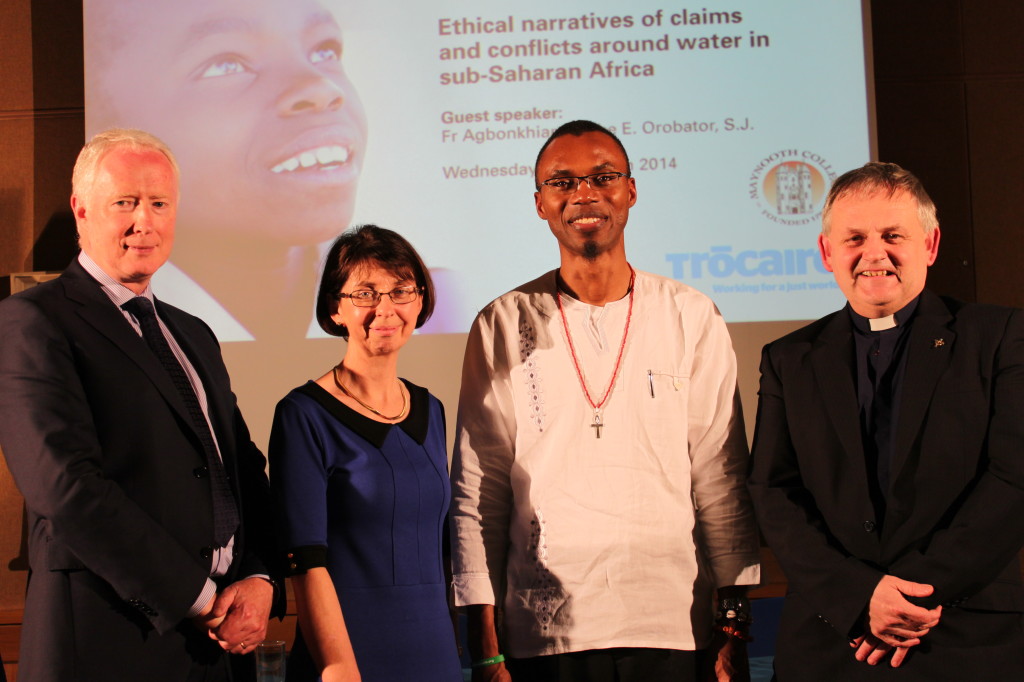 “For many people in Africa, water is a scarce commodity – a precious resource,” Fr Agbonkhianmeghe Orobator, SJ, said in his keynote address for this year’s Trócaire Lenten Lecture on Wednesday evening in Maynooth.

The Jesuit provincial for the East African countries of Kenya, Ethiopia, Uganda, Tanzania, South Sudan, and North Sudan, argued in his lecture that water – be it groundwater, surface water, or desalinated water – is a planetary patrimony bequeathed to the inhabitants of the planet and therefore should not be monopolised by special interest groups and “ravenous investors.”

Fr Orobator explained that the title of his lecture, ‘Water Has No Enemy’ is drawn from a proverb which he learned “in my small village town of Benin in southern Nigeria.”

In Renehan Hall in St Patrick’s College Maynooth, he told the audience, including Bishops Kirby, Nulty and Kelly, that the struggle for fresh water is a conflict that has dogged humanity from time immemorial and in our day and age shows little sign of de-escalation.

The 47-year-old Jesuit priest and author said the association of water and gender has a long history.

“In sub-Saharan Africa, the burden of water procurement falls disproportionately on women and girls and exposes them to grave dangers in form of gender-based sexual violence, especially in rural settings.”

“Their domestic and labour-intensive tasks of cooking, cultivating and cleaning mean that water is a highly sought after commodity. For those women and girls accessibility to water becomes a matter of life and death or at least the source of grave harm to their bodies.”

He said he had seen victims of such water-linked hazards in refugee camps and remote villages.

The quest for water places women in harm’s way, while the scarcity or poor quality of water exposes children to multiple water-borne diseases, he observed.

The Nigerian priest drew a parallel between the African woman’s cry for liberation from the vicissitudes and perils of water procurement and the Samaritan woman’s fervent appeal to Jesus at Jacob’s well in the Gospel of John: “Sir, give me this water, so that I may never … have to keep coming here to draw water” (John 4:15)

The confluence of gender and water represents a significant dimension of the global water crisis, according to Fr Orobator.

There are other demographic constituencies, such as refugees and internally displaced people, who bear the brunt of this crisis.

In camps that dot the landscape of Eastern Africa – in Ethiopia, South Sudan, Sudan, Uganda, Tanzania and Kenya – some refugees and IDPs must survive on as little as two or less litres of water per person per day.

“It may be true that water has not enemy, but this vital substance is anything but ethically neutral. Water creates many enemies!” 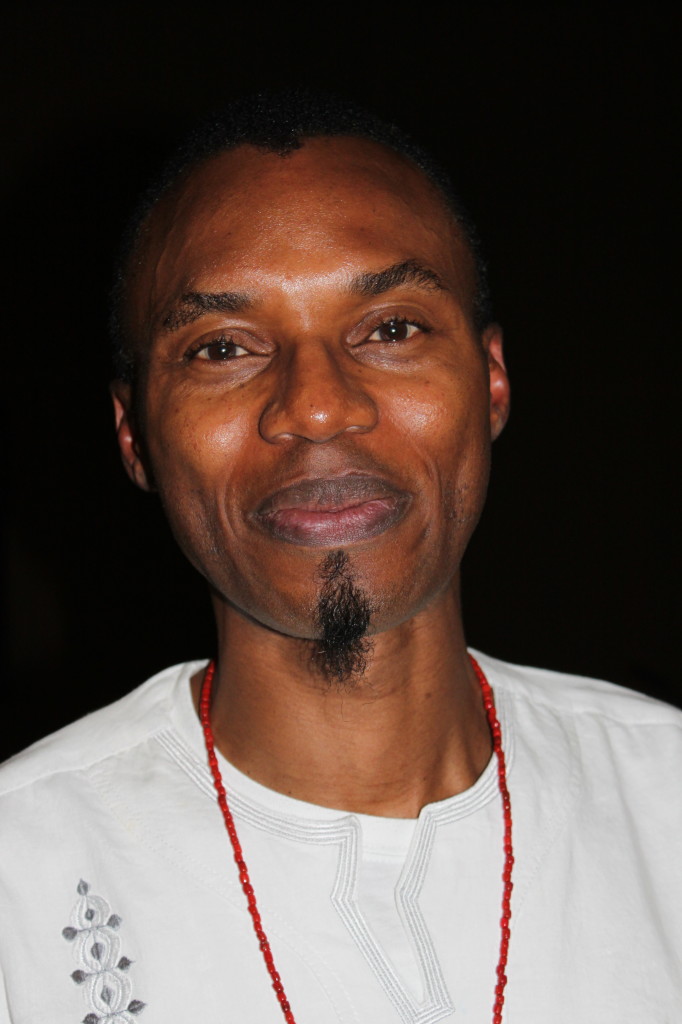 The critical point of his talk, Fr Orobator explained, is that the water crisis confronts us with the urgent task of generating practical and sustainable initiatives founded on solid ethical principles.

“I believe that what Catholic social thought designates as the principle of the common good offers us an ethical framework for a substantive consideration of the panoply of issues around water security, especially through the perspective of rights.”

“The commodification of water as a privatised tradable resource, the inaccessibility of water to the most vulnerable populations and the indiscriminate pollution of water bodies, all constitute a grave assault on this most vital and essential common good and the right of human and natural ecologies that depend on it for survival.”

It was Pope John Paul II who pointed out, “As a gift from God, water is a vital element essential to survival; thus everyone has a right to it” (Compendium of the Social Doctrine of the Church, no. 484).

“I concur with the view that access to fresh water is a universal and inalienable human right, but I fear the language or the claim of rights is easily counteracted or denatured by the contestations and machinations of powerful economic and political institutions which dispose of unlimited resources to procure, privatise, hoard and monopolise access to fresh water,” Fr Orobator told Renehan Hall.

He added that he proposed to “foreground the critical link between the right to water and the concept of the common good in our hydrological debate.”

He highlighted the irony of the technologically super-developed world, where it is considered quite normal to spend $2.5 billion to send a sophisticated robotic instrument to planet Mars in search of traces of water out of – ‘Curiosity’!

Yet “there are 768 million people living (on planet earth) without safe water and 2.5 billion with nowhere (on our planet) to go to the toilet” according to WaterAid.

While around the world, one in eight people (that is 840 million people) go to bed hungry every night, even though there is enough food for everyone.

“Fresh water exemplifies the philosophy of Ubuntu that reiterates the mutual interdependence necessary for the collective survival of humanity.”

Understanding water as common good warrants us to resist the rapacious and widespread attempt to commodify it not for sustainable development, but for the interest of the gilded few, he said.

A narrow economic valuation of a common good creates an institutionalised and unjust bias that excludes the poor and vulnerable while rendering this essential element accessible only to the rich and powerful.

“Without water, life is threatened” (Compendium of the Social Doctrine of the Church, no. 485). “The inveterate pursuit of its commodification for narrow economic gains, coupled with dwindling sources, places the water question on the plane of global concern.”

Fr Orobator said that to guarantee water’s accessibility and sustainability, justice and conversion were essential preconditions.

But he warned that the insatiable thirst for water by our hyper-industrialised world must not be slaked at the expense of economically disadvantaged and vulnerable people.

He warned that the present cast of Africa’s leaders and policy makers “lack the moral acumen necessary, first, to comprehend the urgency of the water crisis, and, second, to initiate concerted, principled measures towards mitigating the crisis.”

In September 2013, the unprecedented discovery of five massive aquifers in the arid northern part of Kenya stirred wild optimism about the potential of this strategic find to radically transform the livelihoods, ecosystems, sanitation and food production capability for present and coming generations of Kenyans in northern Kenya and the entire country.

“Although these are still early days, the disappointments of history make me cautious and doubtful about the government’s capability to capitalize on this enormous hydrological potential to better the lives of its people,” he commented.

“In light of clear and present dangers posed by global fresh water crisis, I see no greater good than ensuring the availability of and access to sufficient quantity and quality of water to meet the health, livelihoods, ecosystem and production needs of global populations, especially the poor and the marginal.”