Home > Featured > Trócaire Lenten box cover girl is back at home thanks to you!

Trócaire Lenten box cover girl is back at home thanks to you!

There is a remarkable success story about last year’s Trócaire collection box, which featured a Ugandan girl, Patricia, on its cover.

The pretty eight-year-old was chosen as a ‘poster child’ for the Catholic overseas development aid agency’s 2019 Lenten fundraising because of the plight in which she and her family found themselves. Following the death of Patricia’s father, her mother Evelyn nearly lost the family farm on which she and her five children relied.

This is because in many parts of the world women do not enjoy the same property rights as men and, in Uganda, often lose their land when they are widowed.

Back in 2015, after Patricia’s father died, his uncle suddenly showed up at Evelyn’s home in the Gulu District in northern Uganda.

“He came to our house and pulled a matchstick from his pocket. He took some grass, lit it and set fire to our house,” Patricia told justice workers after she had been burnt out.

Evelyn was left with only a quarter of an acre, which was not enough to feed herself and her children, which in addition to Patricia, included: Ajok Flavia, now aged 18; Acayo Barbara, 16; Onenecan Ivan, 14; and Opio Ronny, 10.

“My husband was not a rich man but at least we had peace of mind,” Evelyn said, sick with worry, last year. “We had the house. Life was better. He was responsible for all the fees, school fees, and medical fees. He was a good father who loved his children and loved people.”

Trócaire can now happily report that the family have won back ownership of the land that was seized from them. The charity’s Ugandan partner worked with local community leaders to secure fixity of tenure for Evelyn. 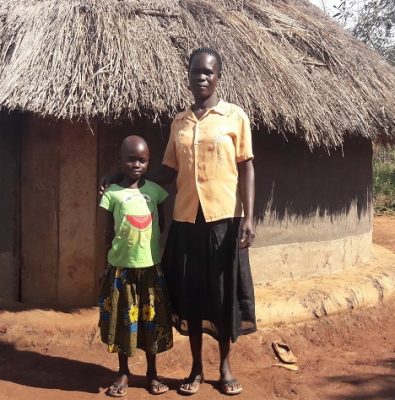 Back on the farm: Patricia and Evelyn outside their rebuilt family home.

“It wasn’t easy in a country with very traditional attitudes and traditions around women owning land, but ultimately the project was a success,” reports Trócaire chief executive Caoimhe de Barra. “As a result, six acres of land were returned to Evelyn and she is also being supported to develop a small business to help her provide an income for her family. A small shelter has been constructed to house two cows. Enough milk is produced for both her family and to sell for money to buy necessities like soap and salt.”

Thanking Trócaire, and those in Ireland, who support the charity, Evelyn said: “I am happy because the land was returned to me and I know myself and my children will use it to grow food.

“Before Trócaire and ARLPI (Acholi Religious Leaders Peace Initiative), I was stranded and did not know where to start from. I felt comforted and energised to start fighting for my land.”

This year Trócaire’s Lenten campaign was hit by the new coronavirus outbreak and the lockdown that followed, which means that the charity urgently needs support now. De Barra said: “This year, due to COVID-19 restrictions, people have been unable to return their Trócaire boxes. Schools and parishes are closed, leaving tens of thousands of Trócaire boxes sitting in homes all over Ireland.

“Unless we receive the donations from those boxes we won’t be able to carry out our life-saving work with families like Patricia’s. Our programmes will be under-funded. Some will have to close for good. This will be devastating for people who rely on our programmes for their daily survival.

“That is why we are urgently appealing for your Trócaire box donation. Please count or estimate what is in your box and donate today.”