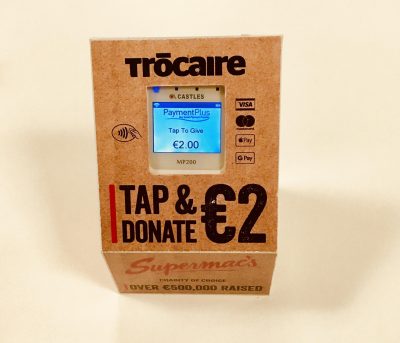 Trócaire is testing new digital donation boxes in Supermac’s family restaurant outlets. Irish people are familiar with the traditional cardboard donation box distributed through every parish in Ireland marking the start of Lent. This innovation gives them another way of donating.

Trócaire said the move to future-proof the traditional countertop donation box comes as people are spending less cash at the till. With this Tap to Donate system, they have the opportunity to use cashless technology to donate to the well-known charity.

“Lent, which begins today, is an important fundraising period for Trócaire, the development agency of the Catholic Church,” said Niamh McCarthy.

Although Trócaire calls this a pilot project, the charity hopes to roll it out to more Supermac’s outlets in the future. Separate to the digital donation boxes, the charity has also distributed one million cardboard donation boxes to schools, homes, parishes and businesses as part of its annual Lenten campaign.

Supermac’s has been associated with Trócaire for around 30 years. The new donation technology in Supermac’s stores is provided by The Smart Group, in conjunction with PaymentPlus, and has been described as “Ireland’s first in-store cashless donation box”.

Tom Ryan, Managing Director at The Smart Group (Ireland), stated that at a time when the use of technology in society is heavily scrutinised and critiqued, his company is extremely proud to have contributed to a technological advancement that will bring relief to those who need it most.

This year Trócaire’s Lenten appeal centres around people who have been left landless in the developing world. The 2019 Trócaire box features three families and the pictures of three girls – Maria (Guatemala), Patricia (Uganda) and Maya (Syria), each of whom has lost land as a result of corporate action or war, or because they are women.

Caoimhe de Barra, Trócaire CEO, said that the corporate race for natural resources has put millions of people around the world at risk of exploitation and abuse. 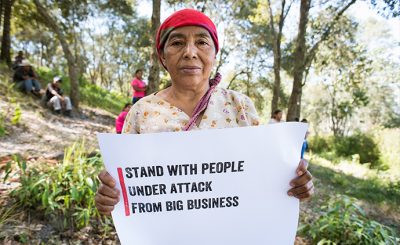 Maria Mercedes Gomez, 65, of the Rio Blanco community, which is resisting construction of a hydro-electric dam.

“The world’s top 10 corporations have a combined revenue equivalent to more than the 180 ‘poorest’ countries,” she said. “This has led to a global sell-off of the natural resources the world’s poorest people rely on. Since 2000, over 49 million hectares of communal or smallholder land – approximately 6 times the size of Ireland – has been acquired for commercial use by transnational entities. This is the land that poor people have relied on to feed their families for generations.”

The Lental appeal was launched with the release of a policy report – Making a Killing: Holding Corporations to Account for Land and Human Rights Violations. This report highlights how the world’s poorest people are not being protected. It found that last year 247 people were murdered in the developing world for defending land and indigenous rights. Since 2015, more than 1400 human rights activists have been attacked for their work linked to corporate actions.