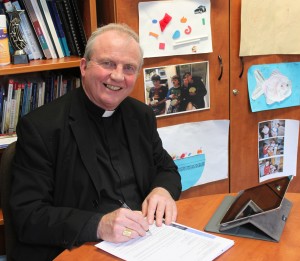 Trócaire, the Irish bishops’ aid agency, isn’t just another development organisation, gathering money and sending it to poorer areas of the world, the Bishop of Derry has said.

In a homily on Friday evening at a Mass to remember the dead who supported Trócaire, Bishop Donal McKeown outlined what makes Trócaire different and how it was born of the mission of the Church to evangelise.

He told the congregation in the Good Shepherd Church in Belfast, that Trócaire was not born merely out a desire to give money to the poor, nor was it just a fruit of liberation theology or a Catholic urge to be in the community of the world’s innumerable development agencies.

Drawing from Pope Francis’s Exhortation, Evangelii Gaudium, he said that just as earlier generations of Irish had shown huge generosity in their support of the development work that was done by Irish missionaries, so the Gospel calls on the modern generation to have “a deep desire to change the world… to leave the world somehow better than we found it” (EG 183).

“The people we remember tonight are the ones who did not forget the uncomfortable social dimension to Christian conversion,” Bishop McKeown said.

Pope Francis, he said, has been quite clear that Christian charity does not just involve having pity on the needy millions who are victims of famine, natural disaster or war.

The Pope, Bishop McKeown noted, refers to fundamental problems that affect the lives of millions and which often contribute to the effects of war and disasters.

“These are problems to which people of faith must say ‘no’ – the economy of exclusion, the new idolatry of money, a financial system that rules rather than serves and an inequality that spawns violence.”

This is not some trendy left wing political agenda, the leader of the Church in Derry underlined and added, “The Church must seek to speak out against whatever damages human dignity.”

He said the prophets of the Old Testament did not offer political solutions but they did speak loudly about injustice and political self-interest among the strong.

“The missionary Church in all its forms has to maintain that prophetic voice if it wishes to avoid playing the tacit political role of justifying the current injustices just by its silence.”

Praising Trócaire, Dr McKeown said it “plays a major role in helping us reflect on the systems failures in our world”, and this would not “always be a welcome voice among those of us who do well from our current systems”.

He said he appreciated that Trócaire gathers major amounts of money from generous people, especially during periods of Advent and Lent and that it is also used as a very effective channel for the delivery of development and disaster relief money from the Irish State, from the European Union and from other international sources.

He said only the funds that it obtains directly can be used directly for projects and purposes that Trócaire chooses. The other monies are driven by the donor organisations.

He underlined that when it comes to spending its own unrestricted funds, Trócaire has to be clear, firstly, that its motivation is the spread of the Kingdom of God through the building up of human solidarity and of a more just world, and, secondly, that it is not embarrassed to repeat the Gospel call to giving from generous hearts and not just from deep pockets.

“Otherwise it could go the way of many Church-founded organisations that have essentially become secularised in their work and ethos while retaining the historical link to church communities and to their huge generosity,” he warned.

He said it would be a tragedy if such bodies lost their dream of building God’s Kingdom and yearned only to do well in the development organisation popularity poll.

“That would be a betrayal of the many supporters, whose generosity was motivated by the compassion of God and not merely by brand loyalty.”

The bishop warned that these were people who were driven by the “scriptural dream of a new heavens and new earth and not just by slick marketing”.

“I know that Trócaire is very committed to this way of being a development agenda. In some ways there is actually a greater need for their educational outreach.”

“If we are to be a missionary Church, seeking to get out a message that so many of our contemporaries have never heard, then Trócaire has a wonderful range of inspiring Church documents as well as a band of dedicated staff and supporters who both know that message and seek to live by it,” the Bishop of Derry said.