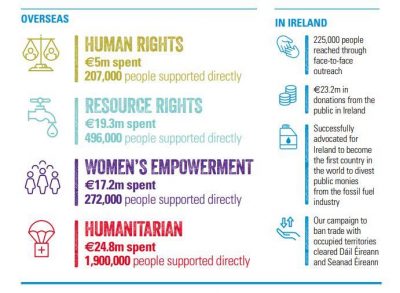 The figures were released in Trócaire’s Annual Report, which detailed how donations of €23.2m from the Irish public helped those facing poverty and injustices across the world.

“Child mortality has declined by 49 per cent since 1990. Many once-deadly diseases have been brought under control or eradicated,” stated Bishop William Crean of Cloyne Diocese and Chair of the Board of Trócaire, speaking of progress in recent decades.

“There is much to be positive about. Yet, as this Annual Report attests to, many challenges remain. Human rights are increasingly under threat in many parts of the world, while the dangers brought about by climate change are rising,” he added.

Trócaire reported a number of successful advocacy campaigns during the last year, which included helping to secure court judgements in Guatemala in relation to crimes committed during the genocide of indigenous communities in the 1980s. Trócaire warned there has been a deterioration in human rights standards in many countries in recent years too.

“Governments are increasingly restricting civil society and targeting human rights defenders,” said Caoimhe de Barra, CEO, Trócaire. “We have launched a campaign to secure a binding Treaty on Business and Human Rights, recognising the fact that 247 of the 321 human rights defenders killed in 2018 were assassinated for protecting their communities’ rights, often in the face of corporate interests.”

The Lenten campaign remains Trócaire’s largest fundraiser, and it generated €7.6m. Last year, €2.3m was raised during the Christmas appeal as people responded to conflicts affecting families in countries such as Yemen and South Sudan. This was one of the charity’s best Christmas campaigns in its history and reflects an increase of almost 10 per cent on 2017. 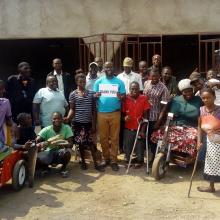 496,000 helped to improve their access to land and water. A further 272,000 people were assisted by the organisation’s Women’s Empowerment programme, while 207,000 people received human rights support.

Trócaire provided support to people in 27 countries in Africa, Asia, Latin America and the Middle East.

In terms of numbers of people supported, Trócaire’s largest programmes last year were in Ethiopia, Sudan and Kenya. One project involved setting up the Village of Hope in Kambia, Sierra Leone, a community for people living with disabilities, run by a partner, the Welfare Society for the Disabled, with support from Trócaire.

In Ireland a two-year campaign by Trócaire and other organisations resulted in a landmark decision by the Irish government to become the first state in the world to withdraw its investment in the fossil fuel industry.

The impact of climate change becomes more and more stark for the communities where Trócaire works around the world.