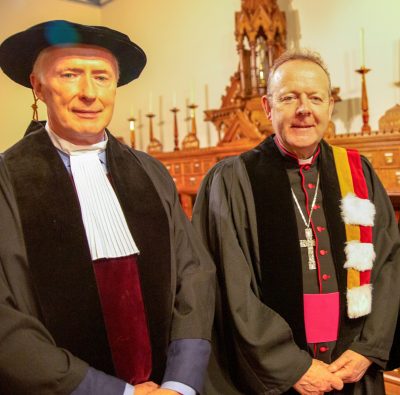 Caoimhe de Barra, current Chief Executive of Trócaire, Bishop Denis Nulty and Misean Cara are among those who paid tribute to former directors of Trócaire who have received special awards.

On the occasion of the 2019 Trócaire/St Patrick’s College Lenten Lecture on 12 March delivered by Archbishop Diarmuid Martin, Justin Kilcullen, director of Trócaire from 1993 to 2013, was conferred with a Papal Knighthood of the Order of St Gregory the Great. Eamonn Meehan, director from 2013 to 2018, was conferred with an honorary doctorate in theology by the Pontifical University at St Patrick’s College, Maynooth.

“A proud day for Trócaire as our former Directors Justin and Eamonn were honoured for their work for justice and human rights around the world,” stated Caoimhe de Barra, current Chief Executive of Trócaire.

The missionary movement Misean Cara congratulated Justin Kilcullen for being recognised for his 33 years of service to Trócaire.

“A wonderful night as Eamonn Meehan receives an honorary doctorate from Archbishop Eamon for the work of Trócaire whose outreach impacted on the lives of 2.8 million people in 2018, offering them ‘a footprint of hope’,” said Bishop Denis Nulty.

Justin Kilcullen retired from Trócaire in October 2013. He was executive director for 20 years from 1993 to 2013. Prior to that, he worked as Africa Programme Officer and also for a period in Laos.

A qualified architect, he began working overseas in Tanzania before moving to Asia, where he was involved in the design and construction of refugee camps for Cambodian and Vietnamese refugees. He joined Trócaire in 1981 as Africa Programme Officer and later served as Trócaire representative in Laos. He is a past President of CIDSE, an international alliance of Catholic development organisations in Europe and North America. 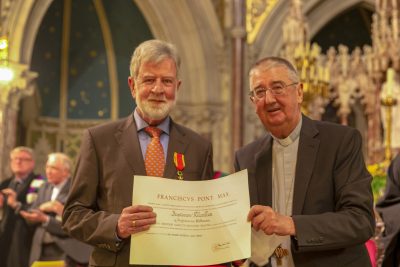 Justin Kilcullen, as Director of Trócaire, gave an address at the National Novena, Knock, on 20 August 2012, in which he said: “As Christians we must strive to build a world which does not just offer the good life to a few, but rather a life that is profoundly good for all.”

He said: “The Trócaire box has become part of the nation’s life. Generations of children have grown up with it. It has served as their first means of expressing their solidarity with the wider world.”

On behalf of the Trócaire organisation, former executive director Éamonn Meehan received an honorary doctorate in theology. Éamonn Meehan first joined Trócaire in 1991 as programme manager for the Southern Africa Region. In this role he managed the day-to-day running of Trócaire’s work in South Africa, Mozambique, Angola, Zambia and Zimbabwe.

In 1996 he became head of the international division, responsible for Trócaire’s work overseas. This included the allocation of resources to development and humanitarian programmes and securing co-financing from the Irish government, the EU and others. In 2002 he was appointed deputy director and head of Trócaire’s Ireland division with responsibility for fundraising, marketing, communications, development education, policy and campaigns. The Co. Clare native became executive director of Trócaire in October 2013.

On announcing his retirement just under a year ago, he said: “The work Trócaire performs each and every day is vital and life-changing.”

He paid tribute to the staff of Trócaire and the Irish public who he said had been “steadfast in their belief in justice for the world’s poorest people”.

The honorary doctorate was granted in recognition of Trócaire’s continuing work for justice and peace in the developing world. Trócaire was established in 1973 and is the overseas development agency of the Irish Catholic Bishops’ Conference. Caoimhe de Barra, current chief executive of Trócaire, was appointed in October 2018.