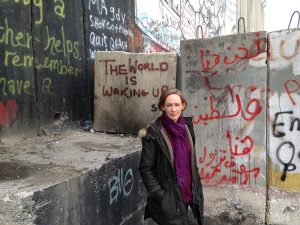 Despite the best efforts of human rights organisations, the Israeli military recently started the demolition of houses and apartments located near the Israeli Annexation Wall (known to Arabs as “the Apartheid Wall”).

This 708km-long barrier runs between Israel and the West Bank. Most of it is built on Palestinian territory, effectively annexing 5 per cent of the West Bank onto the Israeli side of the barrier and leaving Palestinian farmers without access to their fields and orchards.

In addition to the barrier, Israel has imposed an exclusion zone that runs, on average, 30m on either side of the wall. No human activity is permitted by the Israeli authorities.

As a result of the exclusion zones, Israel has destroyed Palestinian homes located in the vicinity of the barrier. Demolitions in the Palestinian village of Wadi al-Hummus, in the Sur Baher district, began on Monday, with the Israeli army destroying 13 buildings, including at least 14 apartments. These buildings were home to two extended families comprising 17 people, 11 of whom are children.

“Demolitions in Sur Baher serve only to undermine the human rights of Palestinians and jeopardise hopes for long-term peace and a two-state solution,” said Ms de Barra.

“Reports in Israeli media have detailed how Palestinians have invested their savings in building homes for their families only to see them destroyed. Decisions taken in relation to planning in this community are clearly motivated by the Israeli Government’s unjust desire to disconnect Palestinian communities in the occupied Palestinian territory.

“This is yet another example of the need for Ireland and the EU to take a stand against Israeli authorities’ flagrant disregard of international law. We call on the Irish Government to support the Occupied Territories Bill, which is expected to return to the Dáil in the autumn, in order to further the cause of long-term peace.”

The Society of St Yves, a Catholic human rights centre and legal practice and a Middle Eastern partner of Trócaire, tried to block this week’s demolitions by obtaining an injunction, but Israel’s Supreme Court ruled that there was no legal barrier to demolishing most of the buildings.

Those who constructed the buildings at Sur Bahar did so after obtaining permits from the Palestinian Authority and by using their life savings. Many whose houses have been destroyed are now homeless.

The United Nations and the European Union called for the demolitions to be halted.