Trócaire is bringing aid to “people left with nothing” in Indonesia 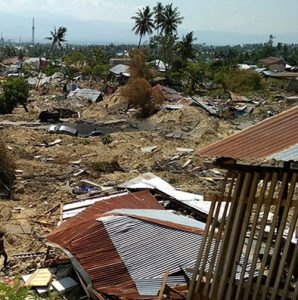 Catholic agency Trócaire is supporting relief efforts in Indonesia following the 28 September earthquake and tsunami that have killed more than 1,550 people.

The 7.5 magnitude quake and resulting tsunami hit the island of Sulawesi, with the regional capital Palu among the areas worst affected. So far 1,558 deaths have been confirmed, but that number is expected to rise.

“We estimate there were over one thousand houses buried, so maybe more than 1,000 people are still missing,” a member of the search and rescue agency told AFP.

Ciaran Gallagher, communications officer with Trócaire, said the agency is bringing food, water and medicine to people who have been left with nothing. “We are supporting our sister agency, Karina-Caritas Indonesia, who are working in the worst affected areas.”

Currently people are facing severe shortages of clean drinking water, food and medical assistance. The disaster zone has a population of 1.4 million people, with around 70,000 already gathered in crowded evacuation sites. Hospitals in Palu are full, with survivors being taken to hospitals in Makassar, 500 kilometres away. In Palu, the Government has been focusing on search, rescue and removal of dead bodies as an already contaminated water supply has increased the risk of the spread of disease.

So far Trócaire has committed to provide €30,000 to Karina-Caritas Indonesia to support the immediate response to ensure that the basic needs of the most vulnerable are met. “People are in urgent need of food, clean water, shelter and medical support,” said Noreen Gumbo, Trócaire’s head of humanitarian programmes. “Unfortunately, it looks highly likely that the number of deaths will continue to rise further as the terrible impact of the devastation is realised. Our partners are working hard to provide support in areas that have been most difficult to reach.”

While most international aid efforts have so far focused on Palu, severe logistical challenges have meant that many of the worst affected areas have not yet received extensive support. Communities have been cut off by landslides, road blockages, collapsed bridges and major communication issues.

Meanwhile, at its autumn meeting on Wednesday, the Catholic bishops’ conference commended the Catholic charity, whose income increased significantly in the financial year ending 28 February 2018.  The bishops expressed their gratitude to parishioners for their very generous contributions as detailed in Trócaire’s annual report, with income up by 19 per cent.

“The generosity of the public in helping to raise €29.1m meant Trócaire was able to assist 2.8 million people in the developing world last year, with significant contributions made during the Lenten campaign and a national church collection for hunger in east Africa,” the bishops said. Trócaire’s income jumped significantly – by €12m – in 2017, marking the second-highest level achieved in the 45-year history of the organisation.

In relation to the agency’s work, the bishops expressed their grave concerns at the continuing threat of violence in Nicaragua following the human rights crisis that emerged since protests against the Government began last April. “The violence has resulted in over 300 deaths and 2,000 injuries, directly impacting on Trócaire staff and their families as Gerald Vasquez, the grandson of one member of staff, was shot dead while taking refuge in a church,” the bishops said.

Cardinal Leopoldo Brenes, Archbishop of Managua, has asked for the Irish people to pray for a peaceful resolution to the crisis in their country. Cardinal Brenes said it was important that international organisations such as Trócaire are present in the country to offer much-needed support. The situation remains very tense and Trócaire is continuing to work closely with the Church and other partners in Nicaragua.