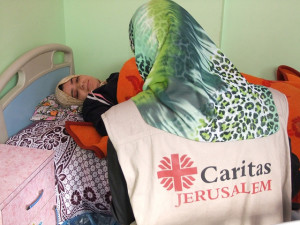 Both sides are acting recklessly and without regard for the safety of either Palestinian or Israeli civilians Trócaire’s Executive Director, Éamonn Meehan, has said.

The Trócaire spokesman also warned that the actions of both Hamas and the Israeli forces contravene international law.

If there were meaningful efforts towards ending violence and building peace this would enhance security and safety for Israel’s citizens he suggested.

He recalled that Trócaire arrived in Israel and in the Palestinian territories in 2002 and works with both Israeli and Palestinian partners to help foster more peace and understanding in the region.

“When I visited Israel and the occupied Palestinian territory in January of this year, I witnessed firsthand the devastation that prolonged occupation is having on Palestinian communities,” Mr Meehan stated in his latest blog.

“Israel’s current military operations in Gaza strike me as ultimately self-defeating for their own security,” he observed.

He added that “Israel should recognise that collectively punishing and impoverishing the people of Gaza, including conducting extensive and disproportionate airstrikes in dense urban areas which inevitably result in large numbers of civilian casualties, will only create anger and hopelessness among the ordinary people of Gaza.”

He added, “Such resentment regrettably results in further violence.”

According to Éamonn Meehan the cyclical violence seen over recent days, will only continue to make millions of Palestinians impoverished and hopeless while Israeli citizens live in fear of daily rocket attacks.

He quoted Pope Francis who said on his recent visit to the Holy Land, there is a need to create, “a stable peace based on justice, the recognition of the rights of every individual, and on mutual security.”

Caritas, Trócaire’s global partner, has launched an emergency appeal to help the people of Gaza.

The charity stated that following attacks by Israel, over 600 Palestinians have died and over 100,000 people have fled their homes to seek shelter elsewhere. Twenty-seven Israelis have been killed in the conflict.

“Most of the victims are children, women and old people. We strongly believe that the Church of Jesus Christ cannot remain silent; we cannot stand aside and do nothing,” said Fr Raed Abusahlia, director of Caritas Jerusalem.

“We decided to intervene quickly because needs of Gazans in the conflict are increasing day by day; we see that damage and destruction are everywhere in the Gaza Strip. Our urgent intervention is needed in this humanitarian crisis.”

He expressed concern for the remaining small Christian community in Gaza who are also suffering like the Palestinian people.

The Caritas emergency programme will provide medical supplies and medicines to four hospitals and fuel for generators. Two thousand families will receive food parcels and 500 families will be given blankets.

A second part of the programme which will be launched in three months’ time will provide 2000 families with cash.

Three thousand families will receive hygiene kits. There will also be a focus on providing psychological support to children and general medical checks to assess the health of displaced Gazans.