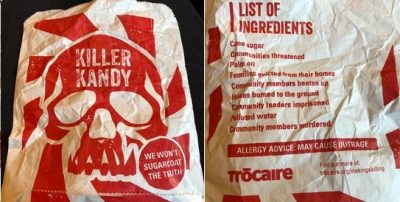 A new campaign to make international businesses accountable for the damage they do in the Third World has been launched by Irish Catholic aid agency, Trócaire.

Trócaire is part of a campaign calling for a UN treaty covering business and human rights. The agency’s CEO, Caoimhe de Barra, said the global human rights legal framework had not kept pace with the modern globalised economy.

Ms de Barra pointed out that while many of the world’s largest corporations have signed up to codes of conduct and best practice guidelines, “non-binding measures are never really going to prevent human rights violations”.

Trócaire’s campaign was launched last week in Dublin with the publication of Making a Killing, a major report on human rights violations and land grabs. Speaking at the launch event, the UN’s Special Rapporteur on the Rights of Indigenous People, Victoria Tauli-Corpuz, said she hoped “Ireland will take up this challenge to strengthen corporate accountability, protect the rights of indigenous peoples and communities to their lands”.

Ms de Barra said that because of a lack of a proper legal framework, unscrupulous businesses are free to “make a killing” when exploiting natural resources by poisoning local environments with industrial pollution, or by forcibly displacing communities from their ancestral lands.

At the launch, Trócaire handed out packets of “Killer Kandy” – sweets with ingredients including “polluted water”, “homes burned to the ground” and “community members murdered”.

In the last 50 years, the world has seen the rise of huge transnational corporations. Global Justice Now estimates that the world’s ten largest corporations have a combined revenue of US$2.9 trillion, which is greater than the combined gross national product of more than 180 of the world’s poorest countries. Of the world’s 100 largest economic entities, 69 are corporations, 31 are countries.

Driven by a profit motive and a requirement to maximise a return on investment to shareholders, transnational corporations have an appetite for increasing their wealth and power.

Across the globe, national governments have been selling public lands to private entities with the result that since 2000, in the developing world, land equivalent to six times the size of Ireland has been sold to private corporations seeking to exploit natural resources such as timber forests or mineral deposits, or seeking to clear lands to grow cash crops such as palm oil.

When local people protest at what is being done to their communities, frequently the powers that be respond with violence. Last year alone, 321 human rights defenders were murdered.

Ms Tauli-Corpuz said: “Indigenous people are being killed, forcibly displaced, threatened and intimidated, and subject to insidious harassment by criminal charges, which often are nebulous, grossly inflated or fictitious.”

The mining and oil exploration industries are often linked to the most extreme human rights abuses. In Honduras, between 2010 and 2017, more than 120 land defenders were murdered; in 2016 there were 837 mining projects underway or in development in Honduras across more than 33 per cent of the nation’s territory.

Trócaire’s policy officer, Siobhán Curran, said a binding treaty was urgently needed to “protect the world’s poorest people and ensure their rights are not discarded in their hunt for profit”.